Bulldogs outmuscle Wildcats on Senior Night 69-40
2/7/14
Batavia’s boys basketball team outmuscled Blanchester for a 69-40 victory on the Wildcats’ senior night at Blanchester High School in Southern Buckeye Conference action.
“A team like Batavia has too many mismatches at the glass,” said BHS head coach Adam Weber. “They clearly had the advantage there. We had our hands full with their physical post players.”
For Blanchester (2-14, 1-7), Alec Richardson led the way with 11.
On senior night for the Wildcats, all four seniors — Austin Jones, Kyle Speakman, Kyle Campbell and Uriel Garcia — started and found their way into the scoring column.  For Weber, those four seniors helped him set the tone for the rest of the program.
“The entire goal of this season was to make sure every kid in our program was aware of the expectations that we are going to demand on a daily basis,” Weber said. “Those four guys accepted that role to perfection.”
Weber said he couldn’t have asked for more out of his seniors.
“They have been unselfish,” said Weber. “They come in and work every single day. They’re excellent students and excellent people.
“They’ve sent the message to the rest of the kids in the program and even in the lower grades that this is what we expected out of players that play for us.” 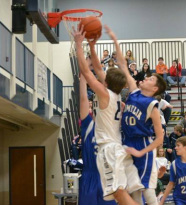 Freshman Boys basketball beat Amelia
Mustangs pull away from Wildcats 72-47
Chase Denham came off the bench to lead the Wildcats with 13 points, six in the first quarter and seven in the third quarter.

Lynchburg scored the first 10 points of the game but Blanchester held fort, rallying to make it a four-point game at the end of one, 14-10.
In the third, the two teams slugged it out with Blanchester winning the quarter 21-20.
But the athletic, up and down the floor Mustangs finally wore out the Wildcats in the final period, pulling away with a 19-5 margin.

Lynchburg edges Blanchester JV 45-43
The Blanchester reserve boys basketball team was defeated by Lynchburg-Clay 45-43 Wednesday night in a non-league game at the BHS gym.
Blanchester made a furious second half comeback after trailing by 10 at halftime, 24-14.
The Wildcats were behind 32-26 after three quarters and outscored the Mustangs 17-13 in the final quarter but came up two points short
Nick Grogg had three three-pointers and led Blanchester with 12 points.
Blan JV boys overwhelms CNE 48-18
Blanchester held Clermont Northeastern’s reserve boys basketball team without a field goal for the first 17:42 Friday night in a 48-18 victory over the Rockets.
CNE ended the game with just four field goals.
Blanchester was led by Quenton Miller with nine points.
Logan Swinderman added eight points. Dade Coyle and Nick Grogg each had seven points. Collin Blevins and David Trivett each chipped in four points. Dylan Nagle, Isaiah Baldwin and Zach Whitt each had three points.

Dakota Heeg’s free throw with no time on the clock Wednesday lifted Blanchester to a 45-44 win over Felicity in Southern Buckeye Conference boys basketball action at the BHS gym.

Heeg dribbled in front of the BHS bench and was not stopped by the Felicity defense so he continued toward the basket. As he got to the foul lane, Heeg went up for a layup and was fouled by Felicity’s Dylan Foster as the clock went to 0:00.

Heeg calmly stepped to the free throw line as the other nine players on the court moved behind him. He sank the first free throw and was mobbed by his teammates while the Cardinals hung their head in defeat.

“This was a great team effort,” Weber said. “We played 11 guys and every one that stepped out there took care of the ball. Fourteen turnovers playing 11 guys … I’ll take that.”

Alec Richardson was the leader for the Wildcats, notching 24 points while grabbing eight rebounds, handing out three assists and coming up with three steals. 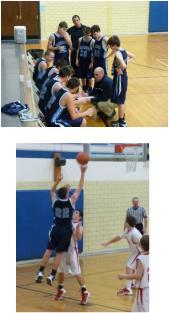 Blan led 43-38 going into the final period but was outscored 20-7 and lost by eight.

Coach Weber was obviously disappointed in the loss, but was extremely proud of his team and their ability to fight through adversity and play with maximum desire and effort. Alec Richardson paced the 'Cats with 17 points, followed by Derek Barger and Braxton Clark with 11 each.

Denham, who scored just five points on the night, is one of Blanchester’s best free throw shooters. Over the final 40.1 seconds of regulation, Blanchester made just two of six from the line.

“Free throws are mental,” said BHS head coach Adam Weber. “When the pressure hit, we had a hard time converting some of those critical shots down the stretch.”

Already down two starters and in a hostile environment, Blanchester couldn’t find a surge in the extra period. CNE outscored Blan 11-3 to seal the victory.

“(CNE) clearly had the advantage when we went to overtime just because of personnel,” Weber said. “When they hit the first bucket to start the overtime, that really swung the momentum in their favor, and applied additional pressure to the pressure we already had.”

Alec Richardson played a strong game for the Wildcats, leading the way with 14 points. Braxton Clark also scored in double figures with 12.

“I was extremely proud of our guys’ effort,” said Weber. “They played extremely passionate. Some early fouls put some of our key weapons on the bench. The other guys stepped up.

Coach Weber gets his first win for the Wildcats
The Blanchester Wildcats completed the SWEEP Saturday night to move the high school program to a collective 5-1. The Freshmen proved mighty with their sound defeat of GCL opponent Purcell Marian, while the JV and Varsity defeated the visiting Dayton Horizon Hawks. Chase Denham led all scorers with 19, followed by senior guard Kyle Speakman with 13. Tyler Muncy had an impressive game on the glass, pulling down 10 rebounds. The Wildcats begin league player on Tuesday at home vs. Felicity.
BHS ends 25-game losing streak

The Blanchester boys basketball team ended its 25-game losing streak Saturday with a 63-51 win over the Horizon Science Academy in a non-league game at the BHS gym.

“This win will help us to know how to win,” said first-year BHS head coach Adam Weber.

Chase Denham had 19 points and seven rebounds for the Wildcats.

“We executed enough possessions on offense and we finished with confidence,” Weber said. 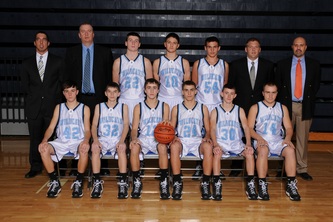 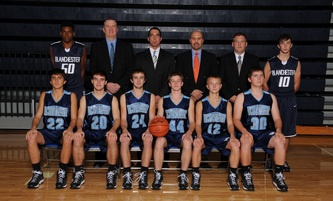 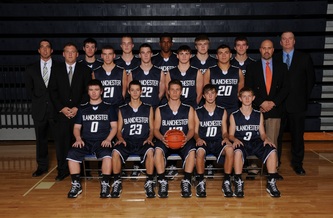