This game was another slugfest. Both teams once again hit the ball extremely well and

we found a way to come out with the win. After falling behind 3-0, we put together a great 4th inning and scored 9 runs, 8 of them were scored with 2 outs. Georgetown then scored 2 in the 5th single and went to second on a throwing error. She then went to third on a past ball.

At that point, Savana Greene hit a deep fly ball to center for a sac fly that proved to be the game winning RBI. Makayla Shank and Mackenzie Curless led the way at the plate collecting 2 hits and scoring 2 runs each. Autumn Leasher and Brooke Jones each once again did a great job on the mound. Overall, this was a complete team victory as every girl played and contributed to the win. - Coach Grogg 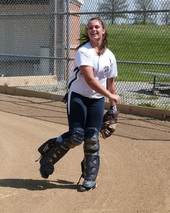 This game was a slugfest. Both teams hit the ball extremely well and we were fortunate enough to come out with the win. Savanna Brown had 4 more hits tonight, giving her 8 straight hits in the last 2 games. She also had 3 more doubles tonight. Makayla Shank, Mackenize Curless and Cassie Griffin also had 2 hits each. Abby Wilson only had one hit, but it drove in the game winning run with 2 out in the bottom of the 7th game tied 10-10. Autumn and Brooke once again pitched very well. Also, this was the last home game for our 5 seniors- Mackenzie Curless, Cassie Griffin, Jordan Greene, Morgan Rogers, and Makayla Shank. I am very happy that we were able to get a win for them. - Coach Grogg 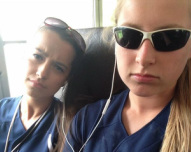 This was good bounce back win for us tonight. After Saturday’s tough loss to East Clinton, I wasn’t sure how the girls would respond today. But, as I have told them before, you have to have a short memory in sports and focus on the next game and they did that tonight. Mackenzie Curless led the offense, going 4 for 4 with 2 doubles and 2 runs scored. Brooke Jones went 3 for 3 with 2 RBI’s, Savanna Brown was 3 for 4 with a double, RBI, and 3 runs scored, and Cierra White was 2 for 4 with 2 RBI’s. Our defense was solid all night long, as we did not commit any errors and made several nice plays to take away hits. Makayla Shank played really well at shortstop tonight, making several nice plays. Brooke Jones pitched another great game scattering 6 hits over 6 innings and not giving up a run. - Coach Grogg

A slow start doomed the Blanchester softball team in a 7-2 Southern Buckeye Conference loss to Batavia.

The National Division loss leaves the Lady Wildcats at 6-5 overall and 2-3 in the league.

Blanchester fell behind 7-0 after two innings. Brooke Jones, who suffered the pitching loss, gave up just two hits over the final five innings.

Jones and Chelsey Walker had two hits for Blanchester. Mackenzie Curless, Savanna Brown, Cierra White and Makayla Shank had one hit each for BHS. Shank had the only runs batted in.

This was a complete team victory tonight. Every girl somehow, someway did something to contribute to the win. After being shut out in our last 2 games, it was nice to see the bats come alive tonight. Savanna Brown led the way going 3-4 with 2 home runs, 7 RBI’s and 3 runs scored. Cierra White and Savana Greene each also had 2 hits and 2 RBI’s. Makayla Shank also had 2 hits and 3 runs scored.

Defensively, we once again had more errors than I would like, but we came up with big plays when needed. On the mound, after getting off to a rough start, (4 of Amelia’s 8 hits came in the first inning), Autumn Leasher really settled down and threw very well to get her 4th win of the season. - Coach Grogg 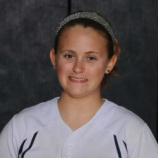 After the way we hit last night, I was a little concerned that the girls would come out over anxious and not be as focused at the plate, but fortunately, that didn’t happen. Makayla Shank led the way, going 3 for 3 with 2 runs scored. Savanna Brown continued to hit well, going 2 for 3 with 2 doubles, 2 RBI’s and 2 runs scored. Cassie Griffin and Abby Wilson also had 2 hits each. What I was most pleased with though, was that every girl in the line-up had at least 1 hit tonight. Defensively, we were once again solid. We did have two errors, but those were the result of girls being aggressive and trying to make plays and I can live with that. On the mound, Brooke Jones pitched 7 solid innings to get her first win of the season. - Coach Grogg

“We battled an undefeated team for seven innings and did everything we could to give ourselves a chance to win,” said BHS coach Jamey Grogg.

Brooke Jones did not allow a hit over the final four innings, striking out one and walking four.

In the seventh, Blanchester had runners at second and third with one out, but “Unfortunately we were just not able to get them in,” Grogg said
Softball improves to 3-0
4/9/14

Mackenzie Curless tracked down a deep fly ball for the final out. Savanna Brown led the offense going 2 for 3 with a 2-run homer in the first and a double in third, she also scored 2 runs. 8 of the 9 girls in the line-up had hits tonight, I will take that any time.  We have a make-up game at home against Felicity tomorrow.  - Coach Grogg
Softball lost to Felicity 7-0
4/10/14

"We just didn’t hit the way we have been. Defensively, we played error free and did what we could to give ourselves a chance to be in the game, but Felicity came up with big hits at the right time." - Coach Grogg

Record 3-1 (1-1).
Lady Wildcats come from behind for 9-8 win
4/1/14
Autumn Leasher’s two-out, two-run homer in the bottom of the sixth Tuesday lifted Blanchester to a 9-8 win over Hillsboro in a non-league softball game at BHS.

Blanchester trailed 8-2 after three innings but rallied with two runs in the fifth and five in the sixth.

“This game was about the girls not giving up and playing all seven innings,” said BHS coach Jamey Grogg.
Leasher blanks Lady Astros in 12-0 BHS win

Autumn Leasher tossed a three-hitter and Blanchester pounded out 14 hits in a 12-0 win Monday over East Clinton in a non-league softball game.

On defense, Blanchester did not commit any errors, Grogg said. “If we want to give ourselves a chance to be successful, we cannot afford to give teams extra outs,” he said.

Cassie Griffin had three hits, scored three runs and stole three bases in the leadoff spot for the Lady Wildcats.