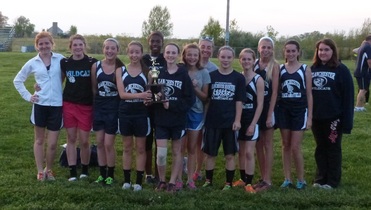 The girls gave it their all last night and placed second at last night's SBAAC conference meet! 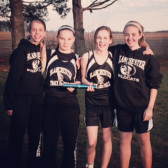 Let's repeat this win on Wednesday at the conference meet! - Coach Nichols

Blanchester set a meet record in the discus with Regan Ostermeier and Kassidy Abney combined for a 153-7 in the discus, eclipsing the old record of 151-1 set by Hillsboro in 2007. 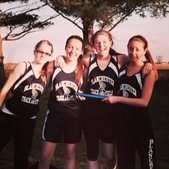 Oliva Gundler and Savannah Rhodes were neck and neck for the 800 meter dash, Olivia ended up pulling ahead and winning 1st by three tenths of a second! Savannah was just a hair behind in 2nd.- Coach Nichols

Girls Track
A great job by all members of the ladies track team, they placed 1st at the Blanchester Quad Meet.
Destiny Pence set the bar high winning first for the 100m hurdles in 18.6 seconds, Kiki Wells placed 4th scoring points for the team as well.
Destiny again placed first in the 200m hurdles with support by Mandy Gerlach in 3rd and Harley Henson in 5th.
Asia Baldwin placed 2nd in long jump - 12ft 9.5 inches
The mile was rocked by Savvy Rhodes,who despite injuring her ankle, placed 2nd at 6min 17s, followed closely by Olivia Gundler - she placed 3rd at 6min 31s.

Kassidy Abnay won 1st in disc, blowing the competition away at 88ft, 11 in.
Taylor Phillips placed 4th at 50ft even.

Mandy Gerlach placed 5th in the 400m dash even though all her events were back to back.

Asia Baldwin placed first in the 200m dash followed by Kayla Cottle in a close second, only behind by four hundredths of a second!!

Coach Nicholls wants to give a high five to Rebekah Fordyce who stepped up, no questions asked, to run the 4x400, last minute when there was an injury. That is teamwork at its best!