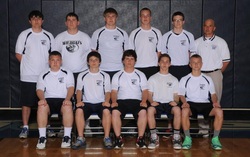 blan did well today in the county tournament. trey lynch defeated east clinton and massie to come in second in first singles to wilmington. first doubles of reilly hopins and logan swinderman also came in second to wilmington as did the second doubles team of wade wells and chase denham. always happy to compete well against the county schools plus it was great weather. the wilmington team looks pretty good this year.  big match on the road friday against felicity. - Coach Shepard 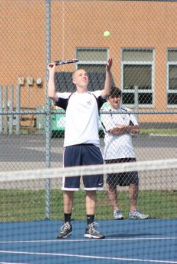 Zane Bolin rallied from a first set loss to win at second singles and gives Blanchester a 3-2 Southern Buckeye Conference boys tennis win over Felicity on the BHS courts.

The Wildcats are now 4-2 overall and 2-1 in National Division action.

Bolin lost the first set 3-6 then rallied to take the second and third sets.

“The match of the day was Zane, who came back from a first set loss to secure the victory,” said BHS coach Scott Shepard. “I was very happy to win such a close match.”
Wildcats dominate Rockets 5-0
4/9/14

Blanchester had no trouble Wednesday in a 5-0 win over Clermont Northeastern in Southern Buckeye Conference action at CNE.

The Wildcats lost just three games the entire match.
Blanchester is 3-1 overall and 1-1 in the league. 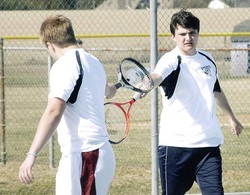 Tennis Wins Again
5-0  4/1/14
On a sunswept, windy day, the Blanchester tennis team outdueled the elements and New Richmond for a 5-0 win in a non-league match at BHS.

photo by Mark Huber
Wildcats net 3-2 win over Lions in tennis opener
3/31/14
Blanchester tennis team opened its season Monday with a 3-2 win over New Richmond in a non-league match at NRHS.

“Any time you beat a powerhouse like New Richmond, it is a huge accomplishment, especially when we are starting three rookie players,” said BHS coach Scott Shepard.