Tyler did a great job of keeping the ball down and getting ahead of hitters today. Tyler isn't a guy that will blow the fastball by you. He needs to throw all pitches for strikes and be able to move the ball around the plate. That's exactly what he did today. He looked real sharp. It will be very nice if he is capable of building on this performance heading into the tournament.

Offensively we came out with bats blazin'. We pounded out 15 hits and made productive outs when we had to move runners. A few loud outs mixed in there as well. Overall, great day at he plate for everyone. Very satisfied.

It was senior day. I had my seniors in the top 3 spots in the order and we started the bottom of the first with 3 doubles. That was pretty neat to see. This group is very special to me. Over the years you spend so much time with your athletes you are able to create a special bond with them. I wish the best for Elijah, Tyler and Kyle. I know they will all move on and be successful after high school.
- Coach Lawson 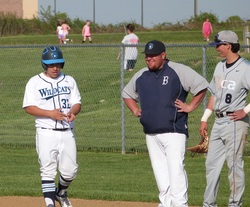 Kyle had yet another solid outing. He deserved to get the win today.

We jumped out on top with a solo shot by Elijah in the first.

In the fourth Elijah hit a towering fly ball that was drifting to deep center that the cf misplayed and Elijah end up on second by error. Two batters later Brady Cain clutched up with two outs and knocked in Elijah with a double to left center.

We went scoreless in our frame and the sixth so we headed into the 7th down one.

6 hole Derek Barger lead off the inning with a ground out to second and Tyler Muncy followed with a fly out to right. Then in struts freshman Jared Monhollen to the plate. He walked on 4 straight pitches. 9 hike hitter Anthony Terrones worked the count into his favor and drove a 3-1 fastball to right center . It was able to move Jared to 3rd. 1st and third the too Kyle Campbell is up. 2 nd pitxh us a curve in the dirt that kicks away from the catcher and moved up both runners. Now with first base open they intentionally walk Campbell to set up a force play. Taylor Greene is due up next. With the count even 2-2 he drove a ball into the gap and I knew it had a chance bc it was hit better than Elijah's in the first. Sure enough a walk off homer.

What a great way to end a great game. Both teams played good enough to win. There started did a great job of pitching backwards tonight and keeping our hitters off balanced . But our guys did the right thing second and third times through and made adjustments. I am very proud of the team today. They all played hard and left everything out on the field. - Coach Lawson

Tomorrow vs Georgetown away. Win guarantees us a share of the league with Batavia

Tyler Muncy Starter and win. 6 innings, 2 runs both in the second unearned (error on shortstop with 2nd and 3rd), 5 bb, 5 k

Derek Barger pitched the seventh and got the save.

The seventh was very exciting. The top was up and Barger had a lead off walk then picked the guy off first. Next guy singles to right on a 3-2 fastball. 3 hole also singled. So 1st and 2nd 1 out and we got the 4 hole to fly out to deep center and moved the runner on second up. First and 3rd two outs Barger threw a 0-1 curveball in the dirt that got away from our catcher and the runner on third tried to score. Barger beat the runner to the plate and our catcher slid to the ball and tossed a seed to Barger and got him to end the game bang bang.

At the plate we only managed 4 hits. We did not do a good job of hitting the top half of the baseball today. We had 12 pop outs. From this team that is very rare. We have made a living this season of putting pressure on the defense by hitting the ball on the ground and forcing them to field and throw it. It looks like we need to take a day and go back to the basics tomorrow off the tee.

Taylor Greene hit a hard single in the first that got by the right fielder and allowed him to get to third. Elijah then got hit by a pitch and stole second. Brady Cain had a 2 RBI single to put us on the board first. In the second Tyler Muncy led off with a walk and proceeded to steal second. Anthony Terrones sacrificed him to third the freshman Jared Monhollen scored him by grounding out to the second basemen.

I bet no one would have thought the winning run would have been scored in the second. That run we produced in that inning playing small ball and making productive outs turned out to be the difference. - Coach Lawson 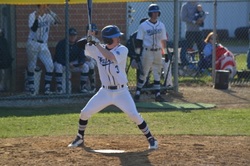 Tyler had a rough first inning but settled in nicely. He did a great job of locating his pitches and keeping the ball down. I was trying to get him a complete game but once he reached his 90 pitch limit I had to go to Alec. Tyler needs to be ready Monday against Williamsburg.

I really liked how we played tonight. We played all phases well, ran the bases smart and played a full 7 innings. Now I want to carry this over into tomorrow and take care of business against CNE. - Coach Lawson

We did a great job of coming out and jumping on top 3-0. Yet another inning haunted us that let the game slip away. We cannot continue to give good teams opportunities and more than three outs an inning. A positive look tonight is we had three freshman in the line up who all performed well (Tristan Greene, Jared Monhollen, Gavin Creighton).
-Coach Lawson
Wildcats Baseball vs Batavia won 7-6 in 8 innings
4/23/14

Tyler looked much better today. Batavia got to him in the fourth by scoring 5 and taking the lead. Through all that he still looked sharp, so I sent him back out in the 5. He cruised through that inning and I let him pitch to the 8-9 hitters in the 6th before bringing in Derek. Derek did a great job of coming in and attacking the strikezone with both pitches. He was keeping hitters off balanced and getting a lot of ground balls.

The team did a great job of fighting back to get this win.
-Coach Lawson
Wildcat Baseball win 12-0 over Goshen
4/21/14

Kyle Campbell win 4 complete innings (3-1)
Alec Richardson appearance 3 innings
Kyle and Alec both threw well for the combined shutout. Both pitched to contact and let the defense play. This was our 5th game in the same amount of days so just using two arms was nice.
We came out and hit the ball well. We added a little every inning. We need to be more consistent with our level of play. Right now we are to day to day. I want to be competitive on a daily basis.

Tonight Tyler did not have his best stuff but impressively still managed to only give up 4 runs. Outside of that we still need to put up more than 1 run if we expect to beat anybody. We had 9 k's (5 of those looking) and only one hit in the first that was an RBI single. They straight put it to us. - Coach Lawson 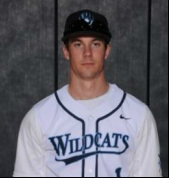 Kyle has another strong pitching performance. They threatened in the first and made him throw 29 pitches but battled out of it leaving the bases loaded and them scoreless. There on he put it on cruise control mowed through there lineup both times after that. Alec Richardson pitched a scoreless seventh to cap the win.

Campbell helped himself in the second with a 2 RBI double after we had a huge sac bunt to move two runners by Jared Monhollen.

We did a much better job of making plays tonight behind our pitcher. I will put our team up against anyone when they play error free baseball. Another good day at the plate. I like our approaches and we are continuing to make productive outs. A great all around win tonight against a great team. Hopefully we can carry this over into our league game tomorrow against Batavia and get things rolling again. - Coach Lawson
Baseball splits Tri @ Reading
4/12/14

This was the best I've ever seen us hit the baseball. We pounded out 19 hits, 7 of which were extra base hits. We simply outhit Fayetteville.

Derek Barger picked up the win 1-0

We were in the drivers seat the entire game. A few routine plays that we didn't make in the later innings haunted us. You cannot give a team like Reading more than three outs an inning or they will take advantage, and that's exactly what they did.

Elijah Elliott knocked in the go-ahead run in the top of the eighth and then shut the door from the mound in the bottom of the eighth Wednesday as Blanchester defeated Clermont Northeastern 5-4 in eight innings in Southern Buckeye Conference baseball action.

In the eighth, Kyle Campbell led off with a walk and then stole second. With two outs, Elliott knocked in Campbell to put BHS up 4-3, coach Aaron Lawson said. BHS added an insurance run in the eighth and needed. 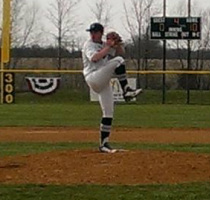 Kyle Campbell did a great job tonight of getting ahead of hitters. The best I've ever seen him. He had command of all his pitches and did a great job of going right at there hitters.

We had much better approaches at the plate today. We even made productive outs. I was pleased how we came out in the first and put up an awesome number.  - Coach Lawson 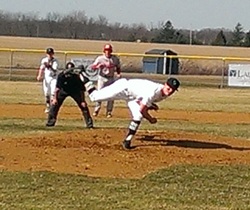 The Wildcats (2-0) trailed 4-1 then plated eight runs in the fifth to gain the win.

“We made a few more mistakes in the field than we typically do, but our guys kept a short memory and turned their focus to the next pitch and next play,” BHS coach Aaron Lawson said. “When (Hillsboro) went up 4-1 that really grabbed the attention of my guys. We did a great job of battling that adversity and never giving up. This team must understand they are never out of the game and it only takes one inning to get things rolling our way.”
Elliott tosses no-hitter as BHS wins 12-0

Elliott tossed his first high school no-hitter as Blanchester opened the baseball season with a 12-0 victory over East Clinton in non-league action at ECHS.  Elliott struck out 14 Astros in five innings.

“He had everything working for him out there today,” said BHS coach Aaron Lawson. “And he was getting ahead of guys. An all-around great performance.”

“We had timely hitting, ran the bases well, and got a phenomenal pitching performance from Elijah,” said Lawson. “Hopefully we can keep the high energy rolling over into tomorrow against Hillsboro.”