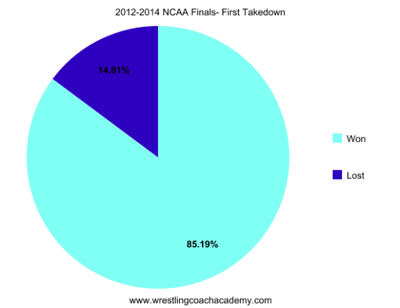 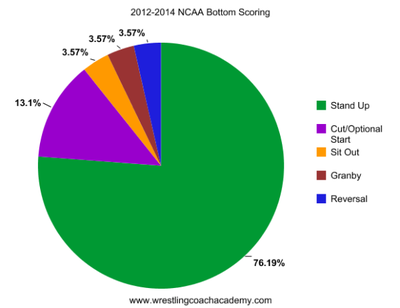 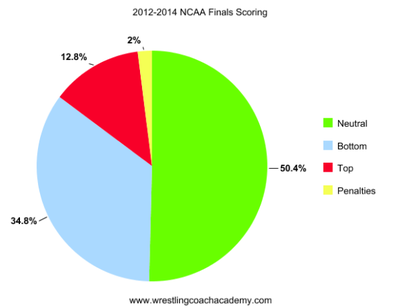 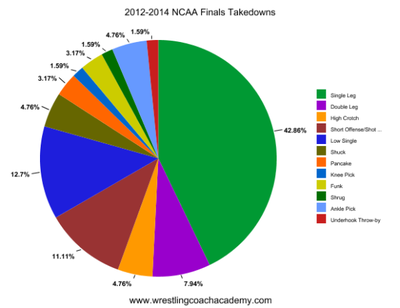 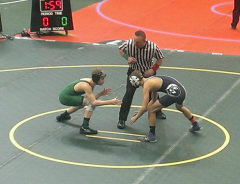 Kyle Denier lost to projected STATE champion in the first Round, then lost in the first round of the consolation matches.  Kyle ends his season being the 2nd Freshman EVER, at Blanchester, to qualify for the state tournament.

Brandon Breezley finished his career at the STATE tournament. Brandon lost a close match in the conso semifinals to a kid who placed 3rd in the STATE. Brandon finishes with 100 career wins, great accomplishment for a three year career.

Wrestling is generally viewed as an individual sport, and rightfully so. But with the advent of the OHSAA State Dual Team Tournament, a completely different mindset has come to high school wrestling.

The Blanchester Wildcats will compete in the Div. III State Dual Team Tournament 11 a.m. Saturday against the Delta Panthers at historic St. John Arena on the Ohio State University campus.

Delta is the No. 1 seed in the Div. III tournament while Blanchester is the No. 8 seed.

The Panthers were the state champions in the inaugural State Dual Team Tournament in 2013.

In the State Dual Team Tournament, an entire team advances in each round to the point where there are now eight teams remaining in each of Ohio’s three divisions. The head-to-head matches add a spice to an already fiery sport.

“This is stressful,” said BHS head coach Scott Nicely. “In a regular tournament, I pretty much know where I’m going to put everybody. In the case of a dual (match), we have holes (in our lineup) so we have to bump guys to get the best matchups we can. It’s pretty challenging … it’s more pressure for the kids.”

With that pressure, however, comes more adrenalin.

“The kids seem to get more pumped up for duals,” said Nicely. “It seems like it’s a little more intense.”

Said junior Conan Nicely, one of the BHS team captains, “Your mindset is always to go out there and win. (In dual matches) the nerves are there all along because you never really know who is going to win.”

Dylan Huston, also a junior and team captain for the Wildcats, said the excitement and added pressure are simply tools he uses to prepare.

“Everybody is watching, everybody is cheering for you or your team. You feed off that,” he said. “I like duals because of all the excitement … I feed off excitement even before I get on the mat.”

Last season, the Wildcats advanced to the final eight of the first State Dual Team Tournament. Brandon Breezley, the lone senior on the BHS wrestling team this season, said early results were positive for a return trip to Columbus.

“One of our main topics when we started the season was to make it back to (Columbus for State Duals),” he said. “When we started season, we were dominating the teams we were wrestling. I was very pleased with our team this year.”

“Coach (Nicely) wanted us to be in pristine condition and ready to go, perfect in a sense,” said the BHS senior.

While Breezley prefers the regular tournament format compared to the dual format, he admits the head to head battles are interesting.

“They are definitely more nerve-wracking,” he said.

Erika Richardson qualified to the STATE Gymnastics meet by earning a 6th place finish in the Bars.  She will compete on March 1st at Hillard Bradley High School.

Kyle Denier qualified for the STATE Wrestling tournament by earning a fourth place finish in the District tournament.

Kyle Denier won his first two bouts to get to the semifinals. After a semifinal loss to Alex Rhine of Mechanicsburg, Denier had to wrestle Covington’s Connor Ryan for a spot at state. With the bout tied at two in the final seconds, Denier scored a takedown with 15 seconds left for a 4-2 victory.

Denier would end up placing fourth, good enough for a trip to the Schottenstein Center this weekend.

“We knew that if (Denier) could get to the semis, and even if something happened there, where we were going to be at in the bracket was good for us,” said BHS head coach Scott Nicely. “He wrestled really well. His head was good. Seemed like he was in the right place all day.  With freshmen, it’s about getting them into the right mindset. He seemed like he was in a good place and it showed in the match.”

Brandon Breezley qualified for the STATE Wrestling tournament by earning a 3rd place finish in the District tournament.

Like Denier, Breezley won his first two bouts. He faced Zach Sullivan in the semifinal. Sullivan raced to a 7-0 lead. In the final minute of the third, Breezley solved Sullivan and rallied to within 7-6 before time expired.

“Had a clash of styles a little bit,” said Nicely. “It took (Breezley) about five minutes to get in a rhythm. Once we got in a rhythm, we were scoring points. We were just fighting the clock. If that match goes another minute – 30 seconds even – it’s probably a different score.”

Breezley rebounded and dominated his final two bouts of the day, pinning Jonathan Carr of Dayton Christian to lock up a spot at state. He then scored a major decision over Wes Buettner of St. John’s in the third place bout.

“(Breezley) lost that match, and came right back,” said Nicely. “He kept his head. He wrestled well and came out in a good spirit. Breezley really dominated that match (against Buettner).” 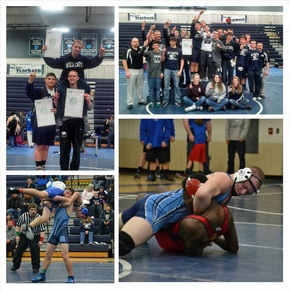 Wrestlers add more hardware to their collection by becoming the 2014 Sectional CHAMPIONS.  The road to the state tournament continues for 11 Wildcats.  They send 11 wrestlers and one alternate to the District tournament next Friday and Saturday.

“Getting 11 guys out means a lot,” said Nicely. “When you get that many out, it means we’re doing something as a program right.” - Coach Nice
district brackets

2/1/14
Back to Back OVERALL CONFERENCE CHAMPIONS! 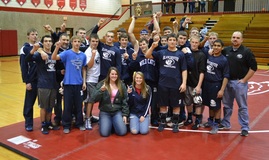 REGIONAL CHAMPIONS!
1/29/14
For the second year in a row, the Wildcat wrestling team advances to the STATE dual meet Tournament.
The Wildcats defeated Chil. Southeastern 51-23 in the semi final match.
The Regional finals would be a match against rival Reading Blue Devils.  As it turns out, the Devils where no match for the Wildcats, Cats roll 48-27 winning 8 of the 10 matches wrestled.
Hunter Collier, Dan Peters and Brandon Breezley had pivotal matches for the Cats.
Brandon beat Reading’s returning state qualifier 5-1 in a match that wasn't as close as the score indicates.

Individual Match Results
These two wins set a school record (22 wins) for wins in a season.

The wrestlers’ next event is this Saturday at Western Brown.  This is the SBAAC championship and the team is trying to repeat as conference champions.  Wrestling starts at 10am.

The Blanchester wrestlers easily advanced Wednesday to the next week’s action in the second annual State Duals team wrestling tournament.

Wildcats posted wins over Wellston, 72-12, and Williamsburg, 62-18, and will compete next week, most likely at Carlisle High School, along with Reading and Southeastern in Ross Co.

The LCC Invitational is known statewide as the best small school tournament in the State.  Wrestling with just 9 kids, the wildcats had wins from all nine . Five Cats placed in the top 6.

Dan Peters and Dylan Huston each had 2 pins for the Cats.

“We wrestled hard and with a few guys out of the lineup and still be competitive is good, but, let’s face it, bottom line is we got beat,” he said. “Nobody likes to lose, especially me. They got beat and they’re going to be disappointed. That makes me happy, not the losing … but they are starting to figure out that they don’t like to lose.” - Coach Nicely
1/18/14
HS Wrestling Team Wrestles Well at Hammer
The team went to Western Brown and performed extremely well placing 7 of the 8 boys that competed in the tournament.
106 Kyle Denier 5th
126 Tristan Greene 7th
132 Hunter Collier 5th
138 Justin Shoemaker 7th
152 Dylan Huston 2nd
160 Trisdon Lillich 6th
182 Conan Nicely 3rd

Wildcats won 9 matches over the weekend improving their record to 15-0 on the season.  They had two shut outs and average score was 52-20

12/19/14
Wildcat wrestlers too much for Wolverines, Warriors
Improve to 6-0

Though the scoreboard was decidedly in favor of Blanchester in both matches against Goshen and Dunbar, BHS head coach Scott Nicely was not wearing a smile when offering his post-match comments.
“The kids have been giving me everything they’ve got,” he said. “They’ve worked too hard to perform like that. It was just one of those nights but what happened out there is unacceptable.”

NEW RICHMOND — At least according to the Cincinnati area coaches poll, the Blanchester wrestling team pulled off a pair of major upsets Wednesday in high school wrestling action here at NRHS.

The wins are the first in the varsity head coaching career of BHS alum Scott Nicely, who took over the program from Bryan Pennix, who stepped down recently.

Other winners on the mat against Withrow were Brandon Breezley (pin in 21 seconds at 182 pounds) and Conan Nicely (pin in 1:54 at 195 pounds). 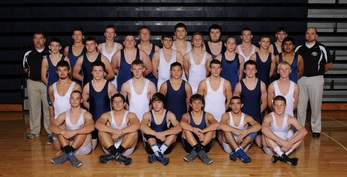