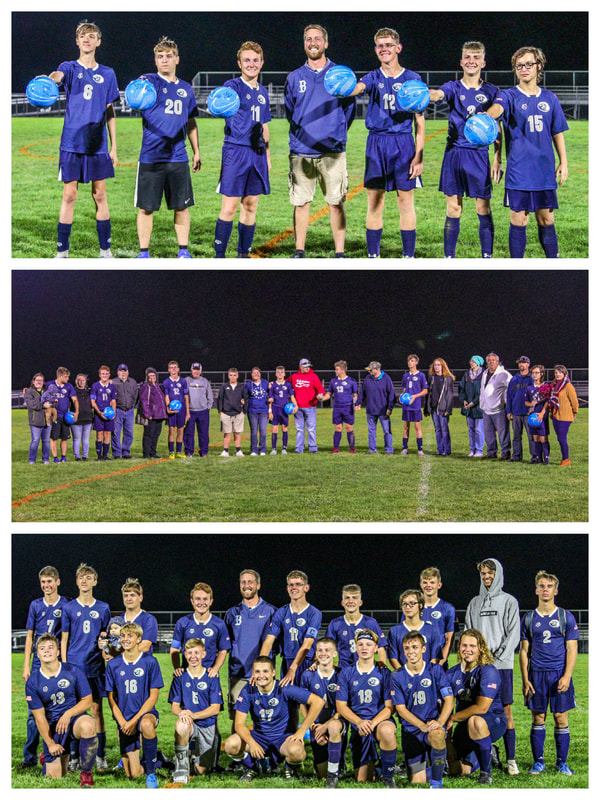 This was a lot of fun for our guys and a great way to send our seniors off on their home turf.  Norwood played a hard fought game and had some good athletes that created trouble for us.  In the end though, our will to win and the momentum that we had throughout the game elevated us to a point that was tough for them to match.  We entered halftime with a 1-0 lead off of a breakaway goal by Carter Stevens.  Unfortunately, there were some missed opportunities in the opening half to increase the lead, but this also helped to create confidence that if we continued working hard the shots would start to go in the net.  That's exactly what happened in the second half.  Carter Stevens was able to draw a foul in the box early on in the second half, leading to a penalty kick that he successfully scored.  Shortly after, Senior Cameron Gibson, played a great ball into the box off of a corner kick, which was nicely headed into the goal by Colton Wilson.  Within a few minutes, Taylor Cochran lifted a ball over the keepers head from well outside of the box that lifted the lead to 4-0.  Norwood continued to work hard and were able to force us to concede a goal.  Despite the goal, we kept our composure and kept playing with great effort, which led to more goal scoring opportunities that we were able to finish.  Scoring the final 3 goals for the wildcats were Reagan Burch, Senior Tanner Kellerman (1st of the season), and Taylor Cochran for his second of the night.  Carter Stevens, Colton Wilson, Reagan Burch, Cameron Gibson, and TJ Monhollen all registered assists on the night.  Overall, it was a fantastic effort by our entire team and a great testament to our seniors that no one wanted this to be our final game.  All 6 of our seniors, Aaron Drexler, Cameron Gibson, Tanner Kellerman, TJ Monhollen, Matthew O'Neill, and Cameron Skidmore, have given a ton to our team this season and the program overall.  For myself, and the rest of the team, we appreciate all of their efforts and wish them the best going forward after the season.  Looking forward to Saturday, we have a tough task of trying to match up with Wyoming, but we are excited for the challenge and will get ready to go compete. -Coach Freeman
Carter Stevens 2 G, A
Colton Wilson G, A
Reagan Burch G, A
Taylor Cochran 2 G
Tanner Kellerman G
Cameron Gibson A
​TJ Monhollen A

This was a very nice win for us.  It has felt like we've been right there in many games this year, but couldn't get over the hump.  We'll play right with teams for most of the game, but come up short on the scoreboard.  This was a good experience for us to fight through some adversity and come out with a hard fought team win.  CNE scored early in the first half off of an unfortunate ricochet that created a one-on-one opportunity with our goalkeeper.  We were able to keep our head up and respond with a goal of our own by Cameron Gibson.  They took the lead again off of another unfortunate bounce off of one of our defenders.  We battled back again and tied it at 2 a little before halftime when  Taylor Cochran netted his first goal of the season.  In the second half we took the lead and did not look back.  Scoring in the second half for the Wildcats were Carter Stevens with 2 goals, Reagan Burch, Taylor Cochran from 30 yards out for his second of the night, and Cameron Gibson with his second of the night on a PK.  Reagan Burch also registered 2 assists, while Cameron Skidmore, Colton Wilson, Carter Stevens, and Jacob Haun had one assist each.  Our defense did a great job to shut them down in the second half along with keeper Zach West having 16 saves.  Again, it was a very good win for our guys and I'm proud of each of them for their effort and resilience.  We hope to use this momentum as we get ready to face a solid Goshen squad on Saturday. -Coach Fremman
Reagan Burch G, 2A
Carter Stevens 2G, A
Cameron Skidmore A
Colton Wilson  A
Taylor Cochran 2G
Cameron Gibson 2G

This was another tough one, but I cannot fault or question our team for the heart that they played with.  We had to battle through various points of adversity, which has been difficult for us this season.  We responded well for most of the game.  Some balls unfortunately did not bounce our way and helped lead to the result.  The last stretch of the game had quite a bit of intensity, thanks in part to a larger crowd due to it being Youth Soccer Night.  I know we all wanted to get the victory, but we will continue to learn and keep trying to improve.  Carter Stevens led the way for us scoring 4 goals, all in the first half, one on a penalty kick.  Colton Wilson and Reagan Burch added the other two goals in the second half.  Cameron Skidmore also had a big day with 2 assists.  Colton Wilson and Taylor Cochran were also credited with assists.  Credit to Felicity for continuing to fight and keep applying pressure to even the score in the final minutes. -Coach Freeman

This was a very nice team win.  Every single player gave a great effort.  Many of our guys were battling some bumps and bruises or sickness, but it did not stop anyone from going out and giving what they could to help the team pull out a victory.  We were able to control the ball for most of the game and were aggressive at the point of attack.  Defensively we were able to keep pretty good positioning and again attacked the ball, instead of allowing the opposition to get control and move forward into our defensive third.  I was happy for the defense to get their second shutout of the season, along with Freshman Goalkeeper Zach West getting his first career shutout.  He had 11 saves in the effort.  Our offense did a much better job of finishing tonight and took advantage of some set piece opportunities.  Cameron Gibson led the way scoring 2 goals off of free kicks.  Cameron Skidmore scored his first of the season by converting a penalty kick in the second half.  Reagan Burch and Carter Stevens also added first half goals.  Colton Wilson and Taylor Cochran were credited with assists.  Overall, this was a solid game for us and we hope that it is a game that propels us forward into a successful second half of the season. -Coach Freeman

9/3/19 - Boys soccer HOME vs. Eastern Brown
Lost 4-2
Record 1-3-1 (1-2-1)
Next Game Thursday 9/5 @ Bethel-Tate 7 p.m.
Unfortunately, this one got away from us.  We had a pretty firm grasp of the game, but some defensive breakdowns along with a penalty kick allowed Eastern-Brown to climb back into the game, and ultimately take the definitive lead.  We had chances and I commend most of our guys for continuing to fight for the duration of the game.  Reagan Burch and Carter Stevens both scored in the 1st half.  The goals were assisted by Cameron Skidmore and Reagan Burch respectively.  Gavin Colebank had some very impressive saves in the goal and totalled 13 on the night.  I continue to be impressed by the work of Taylor Cochran in the midfield as well.  In the end, I'm dissapointed for our players to allow that one to slip away.  Going forward we are going to have to play differently with the lead, and that's on me.  However, I know our guys will show up tomorrow ready to go, focused, and excited to prepare for a solid Bethel-Tate team on Thursday.  -Coach Freeman
Reagan Burch G, A
Carter Stevens G
Cameron Skidmore A

8/29/19 - Boys Soccer @ CNE
Lost 5-1
Next Game Tuesday 9/3 Home vs. Eastern Brown 7 p.m.
This was a hard fought game and the final score is not indicative of the game overall.  I was proud of the effort put forth by our team.  We played well enough to win for about 60 minutes, but faltered down the stretch.  CNE was able to score fairly early on in the first half.  Our guys had a good response though and kept attacking until Cameron Gibson was able to break through to tie it up, scoring his first goal of the season.  After the half, CNE again scored early taking a 2-1 lead.  We continued to attack, but were unable to get another goal.  We also surrendered a couple of goals late that made the score seem much less competive than the game actually was.  I know some frustration set in late, but I believe that if we continue to work we are going to start capitalizing on our opportunities and have success. - Coach Freeman
Cameron Gibson G
Reagan Burch A

It was good to be able to get the result in the end, but we did miss some opportunities to pull out a win.  We did a good job to control the game possession wise.  We kept the ball at our feet most of the game.  We also managed to jump out to an early 2-0 lead off of Carter Stevens brace.  Felicity was able respond by scoring two goals of their own before halftime.  Felicity then was able to take a 4-2 lead with just over 25 minutes left in the game.  Our team battled back admirably, with goals by Reagan Burch and Brison Lucas.  Chances kept coming in the final minutes, but we were unable to get that final goal to go ahead.  The team compiled 16 shots on goal. Even though the result may not be what we wanted, I think we progressed tonight as far as our mental toughness and conviction.  They did not quit on each other.  We get to go at it again tomorrow against another league opponent in CNE. -Coach Freeman
Carter Stevens 2 G, A
Reagan Burch G, A
Brison Lucas G
Colton Wilson A

We lost a tough one tonight.  I think there was a little bit of a hangover from the intensity of our first game that we could not match.  Georgetown jumped ahead early and they were able to dictate the game.  Joshua Galley for Georgetown had a major impact on the game scoring a hat trick.  Our team also fell victim to some plays that were simply unfortunate both offensively and defensively.  We had a few really good chances to score that we were simply unlucky on.  Gavin Colebank finished the game with 9 saves.  Much like after the game Tuesday night, we have to let this be one game and learn from it.  So now it's time to prepare for Felicity next Tuesday and be ready to try to get another league win.    -Coach Freeman

Great game to start the season.  I was impressed by the amount of energy and intensity on both sides.  We did a good job of controlling the ball throughout the contest, but were a little heavy with our touch for the majority of the night.  However, there were many opportunities created to score as we tallied double digit shots on goal.  Colton Wilson was able to connect with a header on a Jordan Gray throw-in into the box with just under 20 minutes to go in the contest giving us the 1-0 lead.  Williamsburg played a very good game and nearly equalized on a free kick late in the game.  Our defense and keeper, Gavin Colebank, did a great job to hold on to the shut out.  Overall, this was an impressive team victory.  The amount of effort that our players displayed was outstanding.  Our challenge now is to maintain our composure and prepare for another tough league game against Georgetown on Thursday night. -Coach Freeman 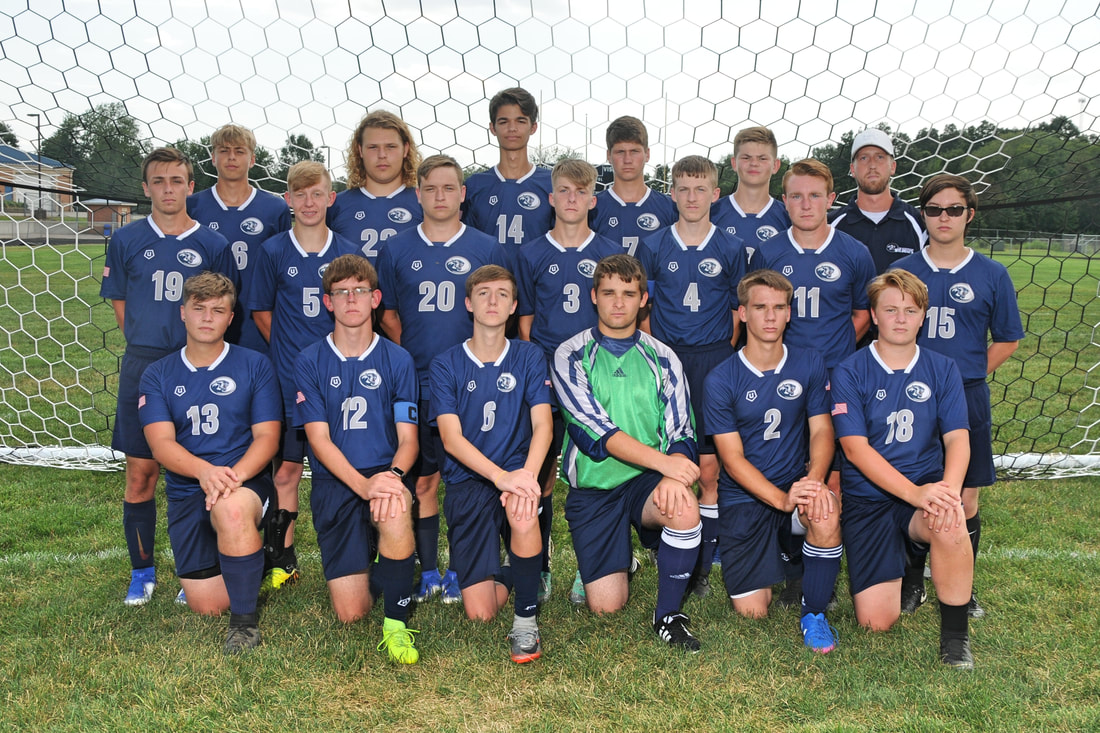 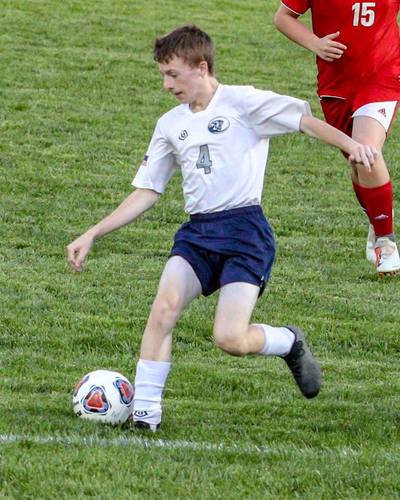 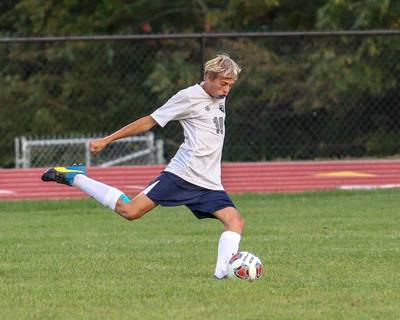 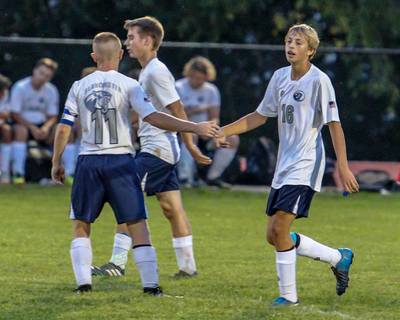 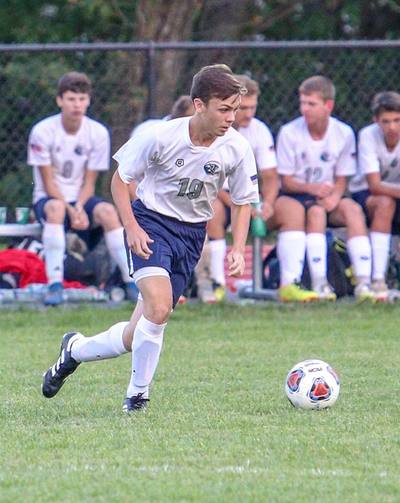 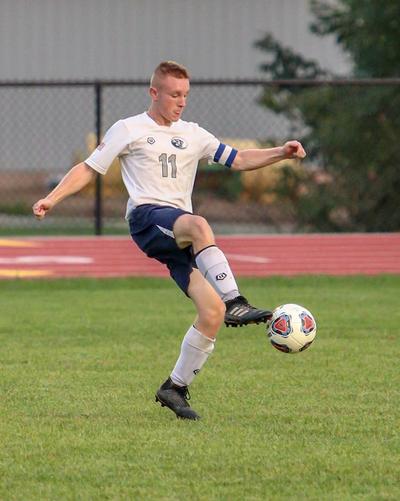