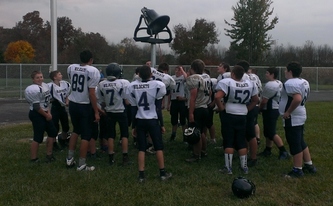 10/16 - 7th Grade Football
PERFECT 8-0!!!
The Blanchester 7th grade football team completed an undefeated season with an 18-6 victory over Fayetteville. The offensive line (Orin Potts, Mason Rector, Gabe Napier, Peyton West, Thomas Dugger, Austin Lewis, Kaleb Goodin, Hunter Bare) took control of the game from the outset, paving the way for the Wildcats to rush for over 240 yards.Tanner Creager was the leading rusher with 91 yards. Scoring touchdowns for the Wildcats were Kadin Berwanger, Christian Stubbs and David Thompson. Fullback James Peters came up big as well, as he was the lead blocker on many rushing attempts and caught a 20 yard pass from Thompson on third and long that set up a touchdown just before halftime. On defense, Stubbs led the team with 8 tackles and an interception. Goodin recorded 7 tackles, Creager and Dugger had 6 tackles a piece. The team finishes with a perfect 8-0 record.
-Coach Ballinger
10/17 - 8th grade Football
The Blanchester 8th grade football team wrapped up their season with a 36-6 victory over Clermont Northeastern. As they have done all season, the offensive line (Cody McCollister, Steven Latchford, Chace Sicurella, Matt Grogg, Luke Thacker, Walker McKibbben, Chadd Maxfield) dominated up front. Despite playing in extremely muddy conditions, the Wildcats ran for over 350 yards. Brent Hopkins was the leading rusher with 159 yards and 2 touchdowns. Dustin Howard had 90 yards and a touchdown. Ramiro Torres had 71 yards, 2 touchdowns and conversion. Ian Heeg completed 2 conversion passes to Derick Bowman. Defensively, McCollister led the way with 10 tackles, 6 of those for a loss. Cole Feirl added 9 tackles. The team finishes the season with a 7-1 record.
-Coach Ballinger

10/13 - 7th gr Football
The Blanchester 7th grade football team improved to 7-0 with a 16-0 victory over Reading. Running a no huddle offense, quarterback David Thompson led a methodical 15 play drive on the Wildcats first possession of the game that was finished off by a James Peters scoring plunge from one yard out. Tanner Creager scored the conversion for an 8-0 lead. The score remained the same until late in the fourth quarter when Creager broke free for a 70 yard score on third and long. Thompson completed a pass to Hunter Bare for the conversion. The defense posted their third consecutive shutout. Christian Stubbs led the way with 15 tackles. Kadin Berwanger had 14 tackles. Creager had 7 tackles and 2 sacks. Thomas Dugger and Kaleb Goodin had 6 tackles a piece. Nate Bates had an interception.
-Coach Ballinger

10/8 MS Football
The Blanchester 7th grade football team defeated Goshen by a score of 6-0. Christian Stubbs scored the only points of the game on a 30 yard touchdown run in the 1st quarter. The defense came up big on multiple occasions to preserve the slim lead. On the last play of the first half, Tanner Kellerman batted the ball away from a Goshen receiver in the end zone. Kadin Berwanger's interception early in the 4th quarter halted a Warrior drive. Later, with just over a minute to go and Goshen inside the Blanchester 20, Stubbs forced a fumble that Berwanger recovered. On the ensuing drive in a 3rd down situation, James Peters broke several tackles and picked up a critical first down to allow the Wildcats to run out the clock. Stubbs finished with a team high 12 tackles. Berwanger had 9 tackles. With the victory the teams improves to 6-0 on the season.

The Blanchester 8th grade football team posted their fourth shutout of the season as they defeated Williamsburg 30-0. The defense got the scoring started for the Wildcats. A Cody McCollister punt was downed at the one yard line. Two plays later, Williamsburg was called for holding in the end zone which resulted in a safety. The score would remain the same until the second half, when Brent Hopkins (126 yards, 1 TD, 1 conversion) and Ramiro Torres (75 yards, 1 TD) found some room to run. Dustin Howard had a huge game on defense with 14 tackles and a 55 yard interception return for a touchdown. McCollister had 11 tackles, 6 of them behind the line of scrimmage. Ian Heeg's one yard scoring plunge capped off a 13 play drive that ate up over half of the 4th quarter and sealed the victory for the Wildcats. Clayton Schirmer threw a conversion to Walker McKibben. The win improves the team's record to 6-1 on the season.
-Coach Ballinger

10/1 8th Gr Football
The Blanchester 8th grade football team defeated Bethel-Tate 54-0. A balanced rushing attack led by Ramiro Torres (58 yards, 2 TD), Hayden Tedrick (53 yards, 1 conversion) and Dale Sturgill (44 yards, 2 TD) racked up over 290 yards of offense.  Brent Hopkins and Tavor Mowry each added a touchdown. Dustin Howard and Clayton Schirmer scored conversions. Schirmer also completed conversion passes to Walker McKibben and Hunter Miller. Ian Heeg completed a conversion pass to Derick Bowman. The Wildcat defense was again dominant, posting their third shutout of the season and not allowing a single first down all game. Cody McCollister led the way with 8 tackles, 5 of those for a loss. Matt Grogg had 2 sacks and a forced fumble. Hopkins recorded 6 tackles, Howard had 5. Ethan McHenry returned an interception 28 yards for a score. With the win, the team improves their record to 5-1 on the season.
-Coach Ballinger

9.24 Middle School Football
The Blanchester 7th grade football team used a ball hawking defense to remain undefeated with a 34-0 victory over Batavia. The Wildcats intercepted the Bulldogs five times in the game. Jesse Wright had two, one of which was returned 80 yards for a touchdown. James Peters was the leading rusher, going for 75 yards with a touchdown. Tanner Creager added two touchdowns rushing and an interception. Christian Stubbs had a big game, rushing for one touchdown and one conversion while having a team high 12 tackles. Canaan West added the final points, scoring on a conversion. Nate Bates and Cameron Gibson each had an interception. The team improves to 5-0 on the season.

The Blanchester 8th grade football team turned three interceptions into scores as they routed Batavia 52-0. Clayton Schirmer, Dustin Howard and Brent Hopkins each picked off a pass and took it for a score. Hopkins starred on offense too, rushing for 157 yards and three touchdowns. He also caught a conversion pass from Schirmer. Schirmer completed two conversion passes to Walker McKibben. Ian Heeg also completed a conversion pass to McKibben. Ramiro Torres scored a touchdown and a conversion. Howard was the leading tackler for the game with 12. Despite running only 21 offensive plays, the Wildcats rolled up 290 yards on the ground, thanks to an overpowering offensive line (Cody McCollister, Steven Latchford, Chace Sicurella, Matt Grogg, Mark Cope, Ethan McHenry, Luke Thacker, McKibben). With the victory the team improves to 4-1 on the season.
-Coach Ballinger 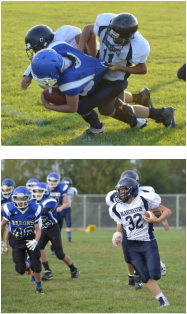 Last week the Blanchester 7th grade football team improved to 4-0 with a 24-20 victory over Amelia. Christian Stubbs (111 yards, 1 TD, 11 tackles on D) and James Peters (90 yards, 1 TD, 1 conversion, 2 sacks on D) led the way for the Wildcats. David Thompson contributed a rushing touchdown and threw a conversion to Cameron Gibson. Tanner Creager also scored a conversion.
The Blanchester 8th grade football team (3-1 record) dominated Amelia in a 44-6 victory. Brent Hopkins had another huge game rushing for 122 yards and a touchdown, returning a punt 55 yards for a touchdown, scoring on a conversion and recording 6 tackles. Ramiro Torres had his biggest game of the season with 95 yards and 2 touchdowns while recording 4 tackles on defense. The other touchdowns were scored on a Dale Sturgill rush and an Ian Heeg pass to Walker McKibben. Heeg also scored on a conversion run. Clayton Schirmer completed a conversion pass to Derick Bowman. Dustin Howard rounded out the scoring with a conversion and had a team high 8 tackles. Defensive linemen Cody McCollister and Ethan McHenry had 4 tackles each.
-Coach Ballinger 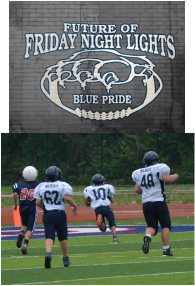 The Blanchester 8th grade football team could not hold a two touchdown second half lead, and fell to Norwood 26-16. Big plays doomed the Wildcats, as the Indians scored on three plays of over 65 yards. Brent Hopkins shined in defeat, rushing for 183 yards and 2 touchdowns, while adding a spectacular one handed interception on defense. Clayton Schirmer completed 2 two-point conversion passes, first to Dustin Howard, then to Walker McKibben. Defensively, Cody McCollister was the leading tackler with 5. Steven Latchford played his best game of the season and recorded 4 tackles. With the loss the Wildcats fall to 2-1.
-Coach Ballinger 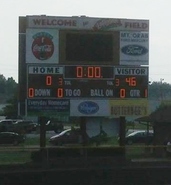 The Blanchester 7th grade football team opened their season with a 44-0 victory over Western Brown. Tanner Creager rushed for 72 yards and 2 touchdowns to lead the offensive attack for the young Wildcats. James Peters added 60 yards and a touchdown. Also scoring on the ground were Kadin Berwanger and David Thompson. Thompson also completed a touchdown throw to Hunter Bare, and two conversion throws, one to Creager and the other to Cameron Gibson. Christian Stubbs and Peters scored the other conversions. On defense, Jesse Wright led the way with 4 tackles and an interception. Gibson also had an interception. Orin Potts had 2 tackles for a loss and recovered a fumble.

The Blanchester 8th grade football team opened the game with a 14 play, 65 yard drive and never looked back as they ground their way to a 32-6 victory over Western Brown. A dominating performance by the offensive line (Cody McCollister, Matt Grogg, Chace Sicurella, Mark Cope, Ethan McHenry, Walker McKibben) wore down the Broncos as the Wildcats amassed nearly 300 yards of total offense. Leading the rushing attack were Brent Hopkins (80 yards, 3 TD's), Dustin Howard (66 yards, 2 TD's) and Ramiro Torres (54 yards). Quarterback Ian Heeg was a perfect 3-3 through the air, throwing for 58 yards. On the defensive side of the ball, Howard led the way with 8 tackles, while Hopkins added 7. McCollister had 3 tackles and 1 1/2 sacks. Tavor Mowry added 3 tackles and an interception. The team is now 1-0 on the season.
-Coach Ballinger
Wed 8/20