2/5/20 - Bowling @ Royal Z for Senior night
match results to be posted
​Congratulations Seniors!
1/27/20 - Bowling @ Royal Z vs. Bethel Tate
The Blanchester Wildcat bowling squads finished league play on Monday night against the Bethel-Tate Tigers at Royal Z Lanes. For the Ladycats, Aleah Wells led with a series of 291 pins, followed by Jill Hudson with 187, Bri Haun with 186, Kylie Campbell with 177, Madison Pembleton and Leeann Stannus contributes with single game scores of 128 and 76 respectively. The Tigers ended up with the win over the Ladycats, 1,740 to 1,380. The Ladycats are currently in last place heading into the league tournament.

For the boys, Orin Potts led with a series of 417 pins. This included a single game of an impressive score of 259. Josh Allen had a 349 series, followed by Bryan Brewer and Brian Miller both with 301, and Jacob Shelton with 267. The Wildcats finished with a win over the Tigers, 2,100 to 1,751. In league play, The Wildcats are 9-3 currently in second place tied with CNE. The league tournament will be held on February 8th to determine final placing. -Coach Ballinger

1/22/20 - Bowling @ Royal Z vs. CNE
The Blanchester Wildcat bowling squads hosted the Clermont Northeastern Rockets Wednesday evening at Royal Z Lanes. For the Ladycats, Kylie Campbell led the team with a series score of 274 pins, followed by Madison Pembleton with 205, Bri Haun with 200, Aleah Wells with 185, and single game contributions by Jill Hudson with 99 and Leeann Stannus with 88. In the end, the Ladycats were no match for the Rockets and were defeated 2,169 to 1,349.

For the boys, Josh Allen led the team with a series score of 404 pins, followed by Brian Miller with 372, Bryan Brewer with 342, Carter Stevens with 316, and Orin Potts with 274. The Wildcats bowled extremely well, however, the Rockets were much more dominant with a final of 2,523 to 2,272. With the loss, the Wildcats share the #2 spot in the league with CNE behind Georgetown with one league match left. -Coach Ballinger

1/16/20 - Bowling @ Eastgate vs. Goshen
The Blanchester Wildcat bowling squads competed against the Goshen Warriors Thursday evening at Eastgate Lanes. For the Ladycats, Jill Hudson led the team with a 282 pin series followed by Aleah Wells with 261, Madison Pembleton with 206, Kylie Campbell with 183, and Leeann Stannus with 162. The Warriors finished ahead of the Ladycats 1,767 to 1,382.

For the boys, Bryan Brewer led the team with a 377 pin series followed by Josh Allen with 334, Orin Potts with 333, Brian Miller with 293, and single game contributions from Taylor Cochran and Carter Stevens with 112 and 152 pins respectively. The Warriors finished ahead of the Wildcats 2,386 to 2,099.

The Wildcats will compete again on Monday in the Muskingum University High School Invitational at Royal Z Lanes. -Coach Ballinger

1/15/20 - Bowling @ Royal Z vs. East Clinton
The Blanchester Wildcats bowling squads faced off against the Astros of East Clinton Wednesday evening at Royal Z Lanes. For the Ladycats, Brin Haun led with a series of 220 pins followed by Aleah Wells with 198, Kylie Campbell with 173, Madison Pembleton with 170, and Leeann Stannus with 156. In the end, the Astros bested the Ladycats 1,619 to 1,248.

For the boys, Josh Allen had a strong series with 470 pins, followed by Bryan Brewer with 322, Brian Miller with 299, Orin Potts with 274, and single game contributions by Carter Stevens and Taylor Cochran with 119 and 113 respectively. The Wildcats went on to win with a score of 2,036 to 1,854. - Coach Ballinger

1/9/20 -  Bowling @ Georgetown
The Blanchester Wildcats bowling squads traveled to Georgetown to take on the G-Men Thursday evening for their second match-up this season. It ended the same as the first time with Georgetown coming out on top. For the Ladycats, Bri Haun led with a series total of 226 pins, Jill Hudson had 194, Aleah Wells and Leeann Stannus both had 190, and Madison Pembleton had 177. The final pin count was 1,299 to 1,777 in favor of Georgetown.

12/17/19 - Bowling @ Royal Z vs. Georgetown
The Blanchester Wildcats bowling squads hosted the G-Men of Georgetown at Royal Z Lanes on Wednesday evening. For the Ladycats, Aleah Wells led with a series of 252 followed by Bri Haun with 232, Kylie Campbell with 213, Jill Hudson with 164, and Leeann Stannus with 163. The Ladycats had their best scores of the season but still lost to the Lady G-Men 1,370 to 1,477.

For the boys, Orin Potts led with a series of 427, followed by Josh Allen with 364, Bryan Brewer with 328, Brian Miller with 294, and Jacob Shelton with 272. Both the Wildcats and G-Men were undefeated in the league going into the match but it was the G-Men who came out victorious 2,361 to 2,187. -Coach Ballinger

12/16/19 - Bowling @ Royal Z vs. Western Brown
The Blanchester bowling squads hosted the Western Brown Broncos Monday evening at Royal Z Lanes. For the Ladycats, Aleah Wells led with 235 total pins followed by Bri Haun with 193. Leeann Stannus had 179, Jill Hudson had 177, while Kylie Campbell and Madison Pembleton had single games of 76 and 71 respectively. The Broncos had more pins overall beating the Ladycats 1,724 to 1,204.

For the boys, Josh Allen has a total of 437 pins while Bryan Brewer had 350 and Orin Potts had 346. Carter Stevens had a series of 264 as Dakota Abney and Taylor Cochran had single games of 125 and 101 respectively. The Wildcats were unable to match the pin count of the Broncos and suffered their second loss of the season 2,452 to 2,092, thus breaking their 7 game winning streak. They are now 7-2 for the season but still ranked first alongside Georgetown who are unbeaten in league play as well. -Coach Ballinger
​
12/11/19 - Bowling HOME vs. East Clinton
The Blanchester Wildcat bowling squads took on the East Clinton Astros at Royal Z Lanes on Wednesday evening. For the Ladycats, Bri Haun led with 234, followed by Aleah Wells with a 229 series. Jill Hudson finished with 177 and Leeann Stannus hit 158. Kylie Campbell and Madison Pembleton combined for 108 pins. The Ladycats were unable to pull off their first win, falling to the Astros 1,194 to 1,536 pins.

For the boys, Josh Allen led with 400 pins, Bryan Brewer had 382, and Orin Potts with 368 following close behind. Brian Miller finished with 301 and Jacob Shelton had 279. The Wildcats finished their final games strong and toppled the Astros 2,271 to 1,820. This win makes six straight for the Wildcats improving their record to 6-0 in league play. -Coach Ballinger 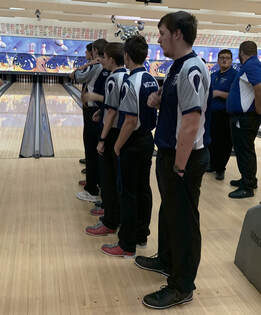 12/2/19 - Bowling HOME vs. Williamsburg
Then Blanchester Wildcat bowling squads hosted the Williamsburg Wildcats Monday evening at Royal Z Lanes in Wilmington. This was the second match-up between both Wildcat teams this season. For the Blanchester Ladycats, Aleah Wells and Bri Haun scored 221 and 219 respectively, with Jill Richardson close behind with 198. The Ladycats were unable to keep up with Williamsburg and fell 1,223 to 1,986. The Ladycats are 0-5 on the season.

For the boys, Bryan Brewer led the pin count for Blanchester with 396 followed by Josh Allen with 388. Allen had the top game for Blan as well with 227 pins. Williamsburg led by 50 pins going into the last two games and then Blanchester cut it down to 6 going into the final Baker’s match. With a strong team effort and a clutch tenth frame by Allen, Blanchester took the lead by 23 pins with a final victory of 2,206 to 2,183. This improves the boys squad to 4-1 on the season.
-Coach Ballinger 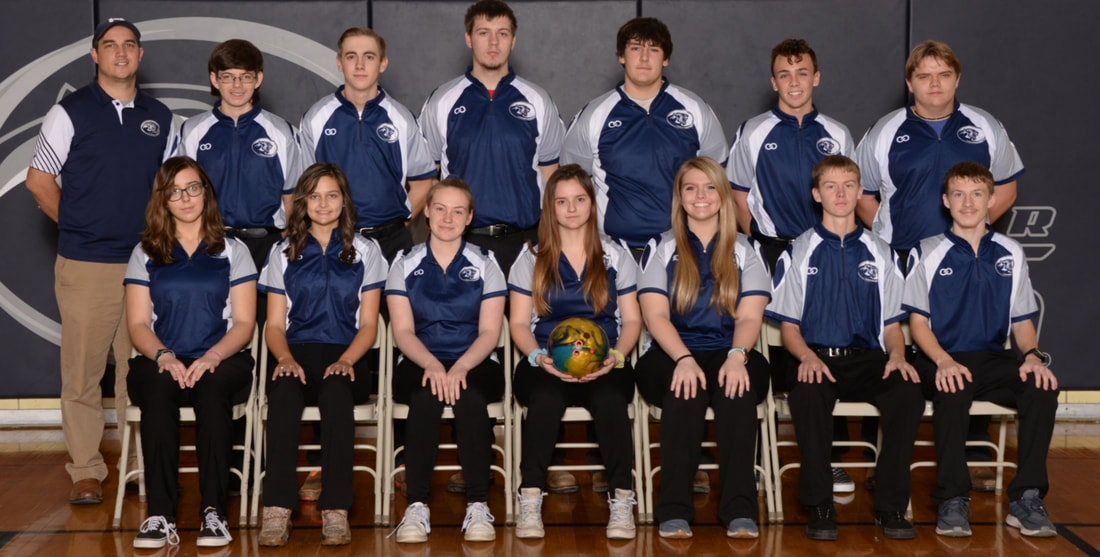 11/27/19 - Bowling HOME vs. Felicity
The Blanchester Wildcat bowling squads hosted the Felicity-Franklin Cardinals Wednesday afternoon at Royal Z Lanes in Wilmington. For the girls, Bri Haun out-bowled the competition with 277 total pins, however the Ladycats were not able to match the overall total of the Cardinals and fell short 1,212 pins to 1,463. The Wildcats are now 0-3 in league play.

For the boys, Josh Allen led the match-up with 422 pins which included a 230 single game. Brian Miller hit a 372 total and Orin Potts added a strong 200 round single game early on. The Wildcats finished ahead of the Cardinals with a score of 2,091 pins to 1,675. This victory improves the boys to 3-0 in league play. -Coach Ballinger

11/22/19 - Bowling @ Batavia Bowl vs. Bethel Tate
The Blanchester bowling squads traveled to Batavia Lanes to challenge Bethel-Tate Thursday evening. This was the first league match for Blanchester this season. For the Ladycats , Aleah Wells was the pin leader with 244 followed by Bri Haun with 214. The Ladycats fell to the very strong Tigers squad 1,278 to 1,774. Blanchester’s overall record is now 0-2.

Both squads will face Williamsburg on Monday evening for more divisional play.  -Coach Ballinger
​
11/20/19 - Bowling @ Eastgate Lanes vs. Goshen
The Blanchester Wildcat boys and girls bowling squads had their first match of the season against Goshen at Eastgate Lanes on Wednesday evening. Both squads faced tough competition and fell to the Warriors. For the girls, Bri Haun led the wildcats with a total of 254 pins followed by Aleah Wells with 235. Newcomers for Blanchester this season, Kylie Campbell, Leeann Stannus, Jill Richardson, and Madison Pembleton, combined with Haun and Wells to total 1,269 pins. Goshen girls had 1,554. For the boys, Josh Allen had the overall highest individual total of 431 pins, while Orin Potts closed in with 400. Combined with the efforts of Bryan Brewer, Brian Miller, Dakota Abney, and Jacob Shelton, the boys overall had 2,085 pins which wasn’t enough to surpass Goshen’s 2,131. Blanchester will travel to Batavia Lanes to take on Bethel-Tate on Thursday. -Coach Ballinger 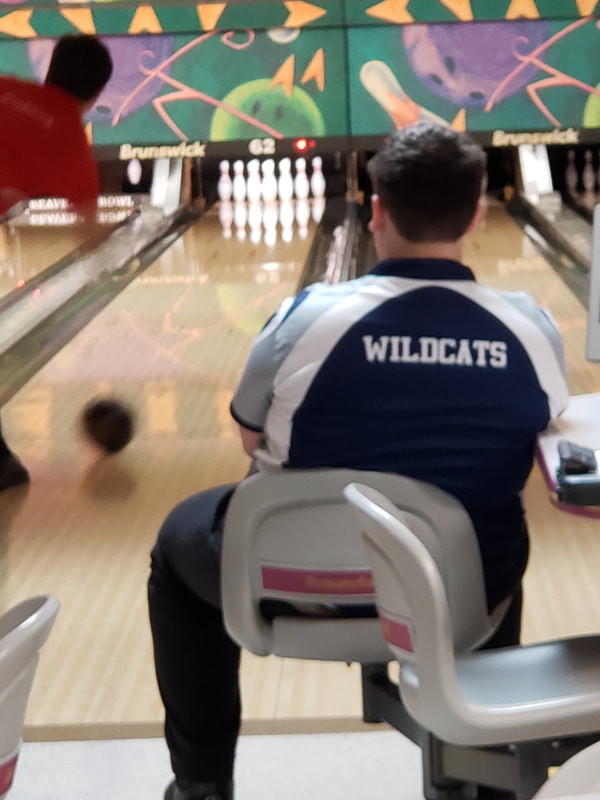 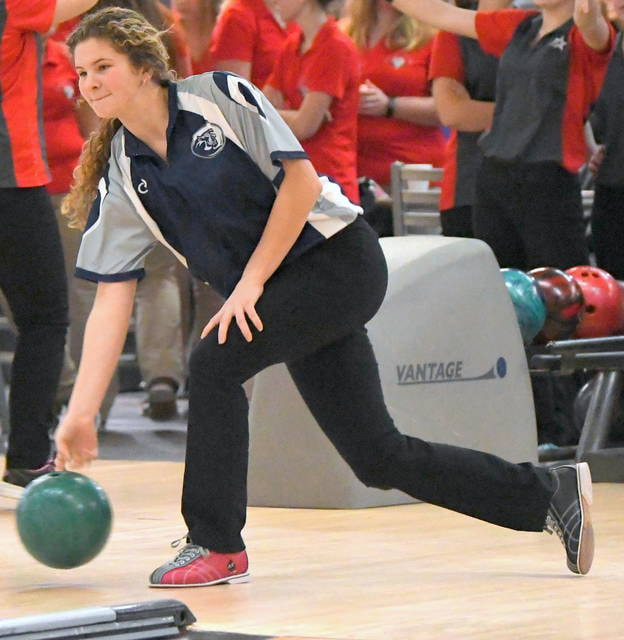 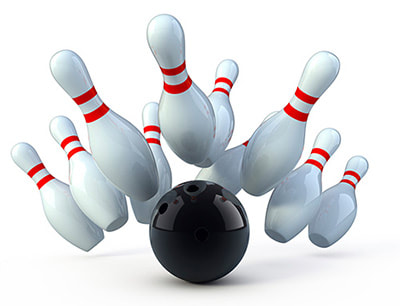 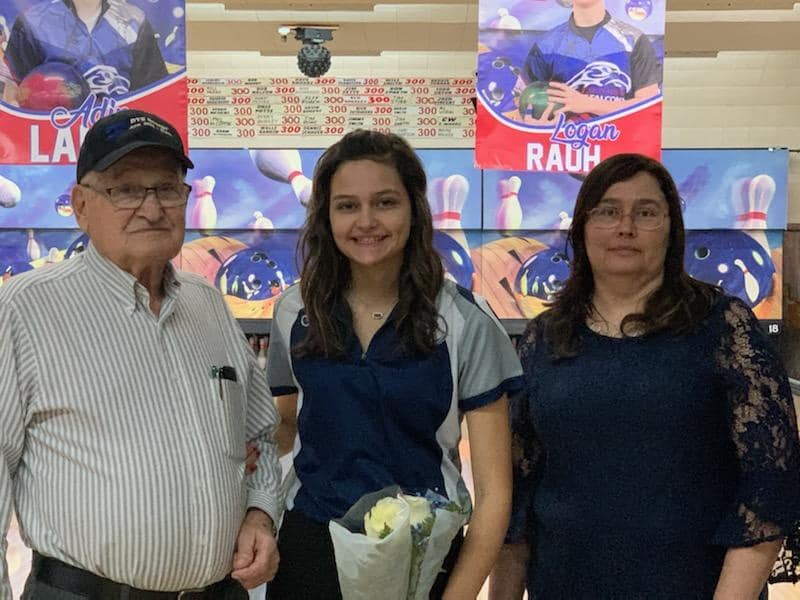 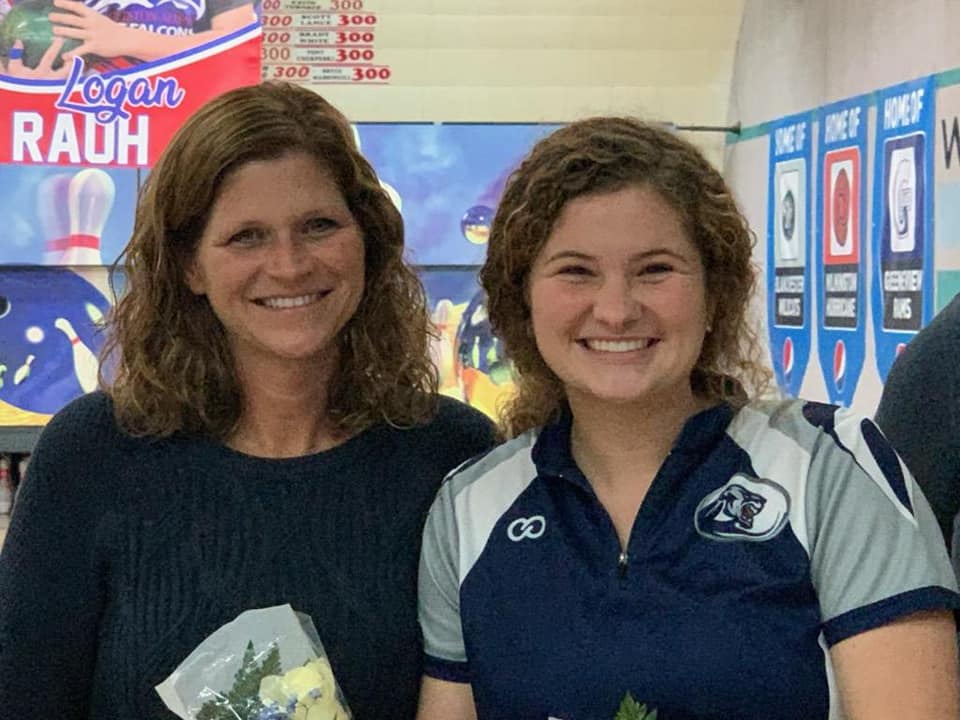 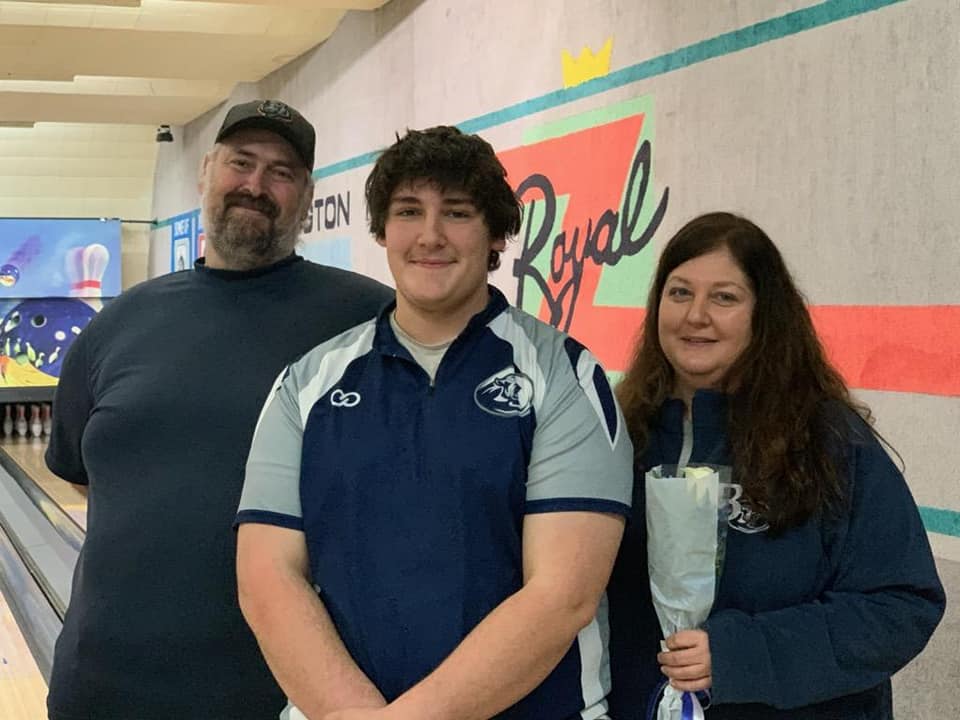 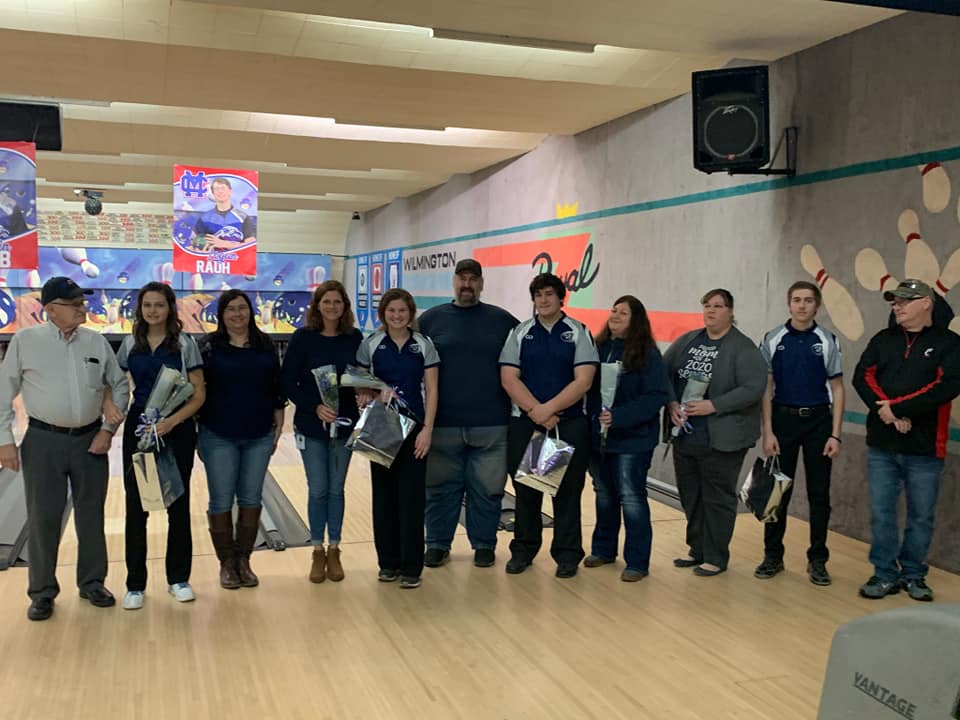 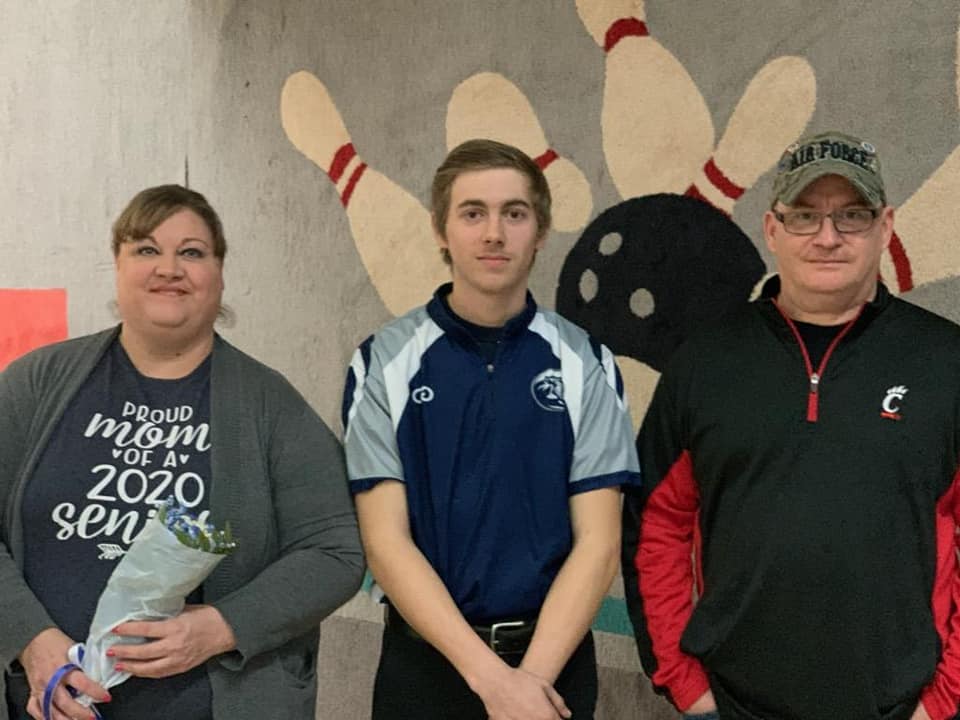 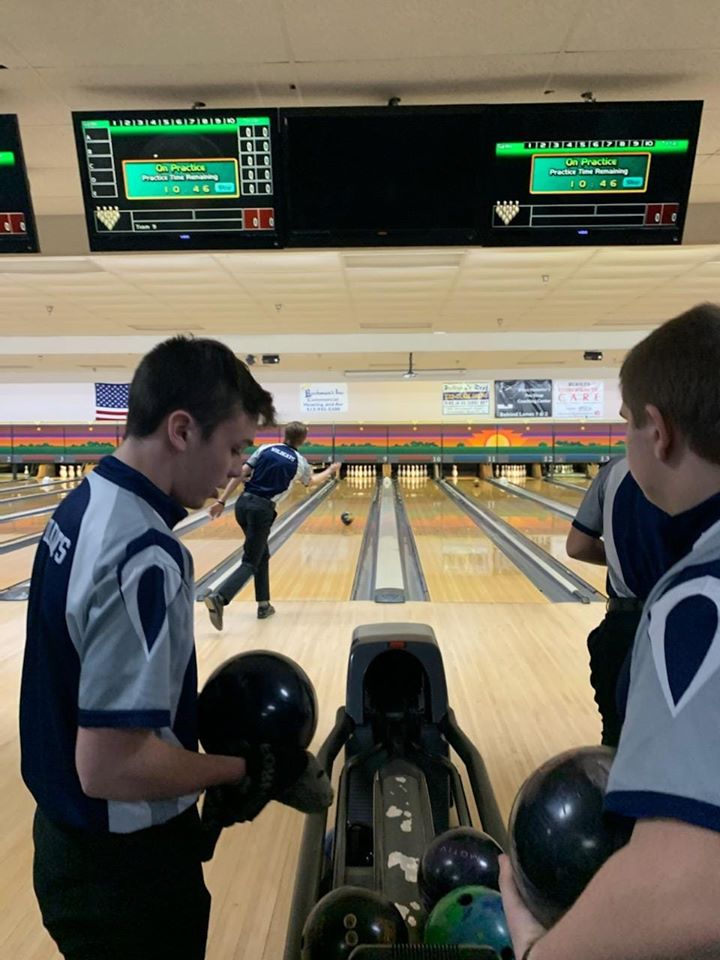 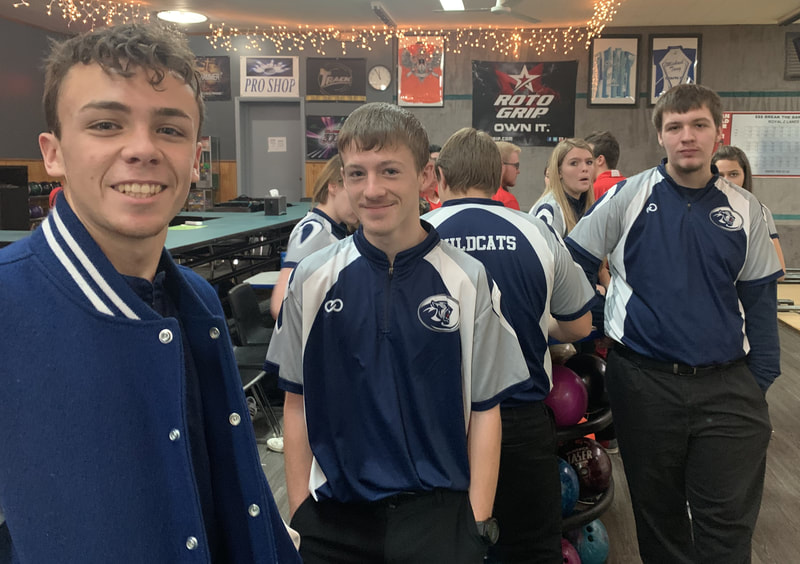 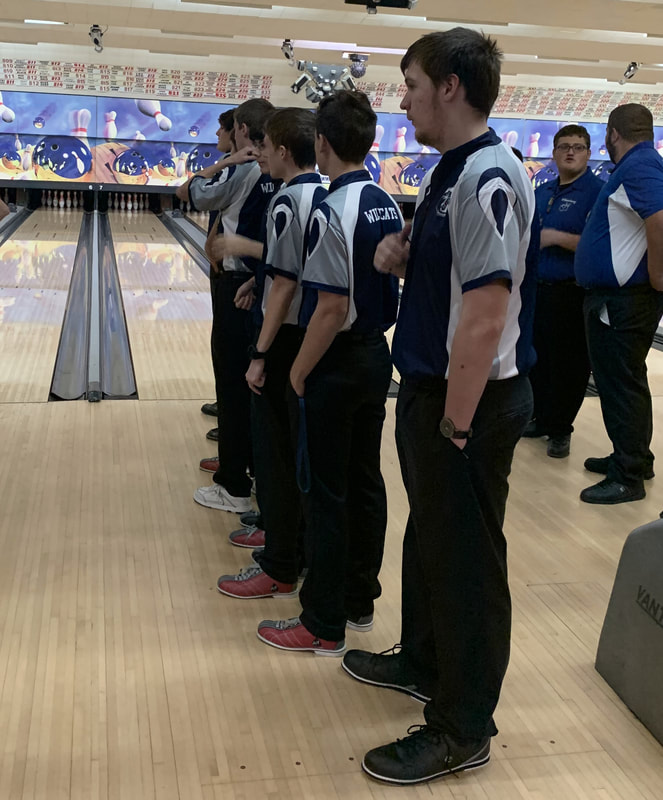 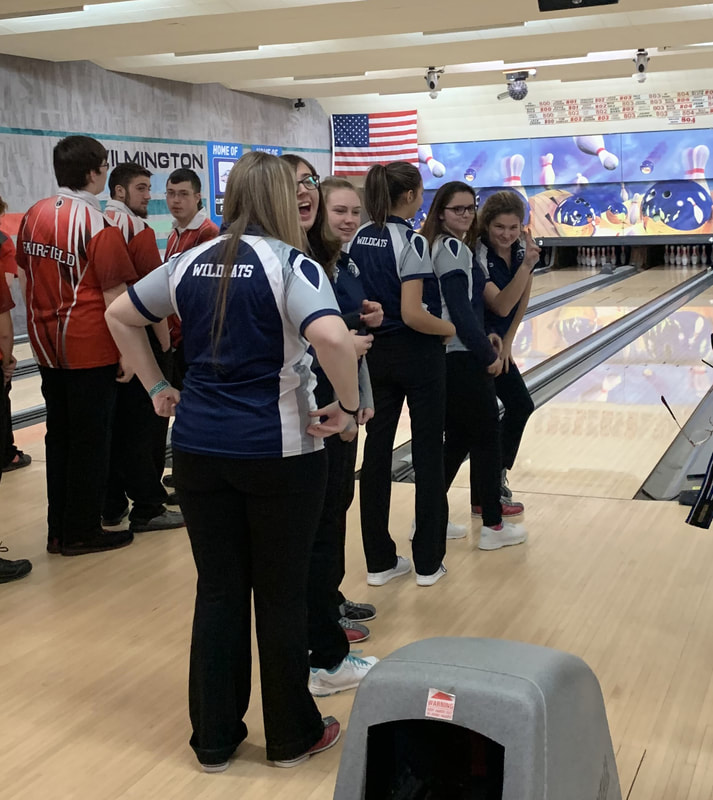 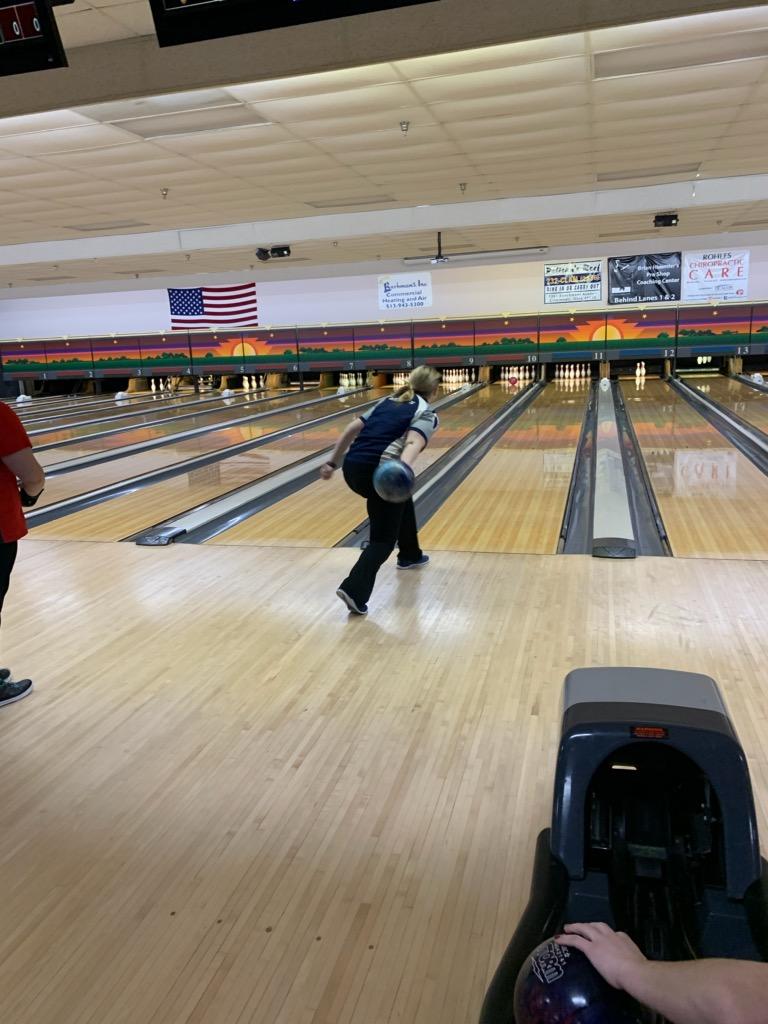 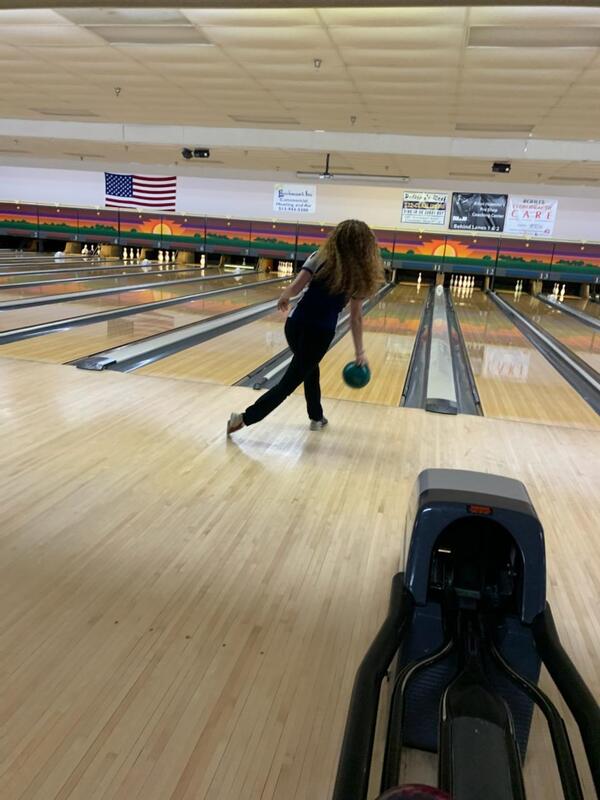 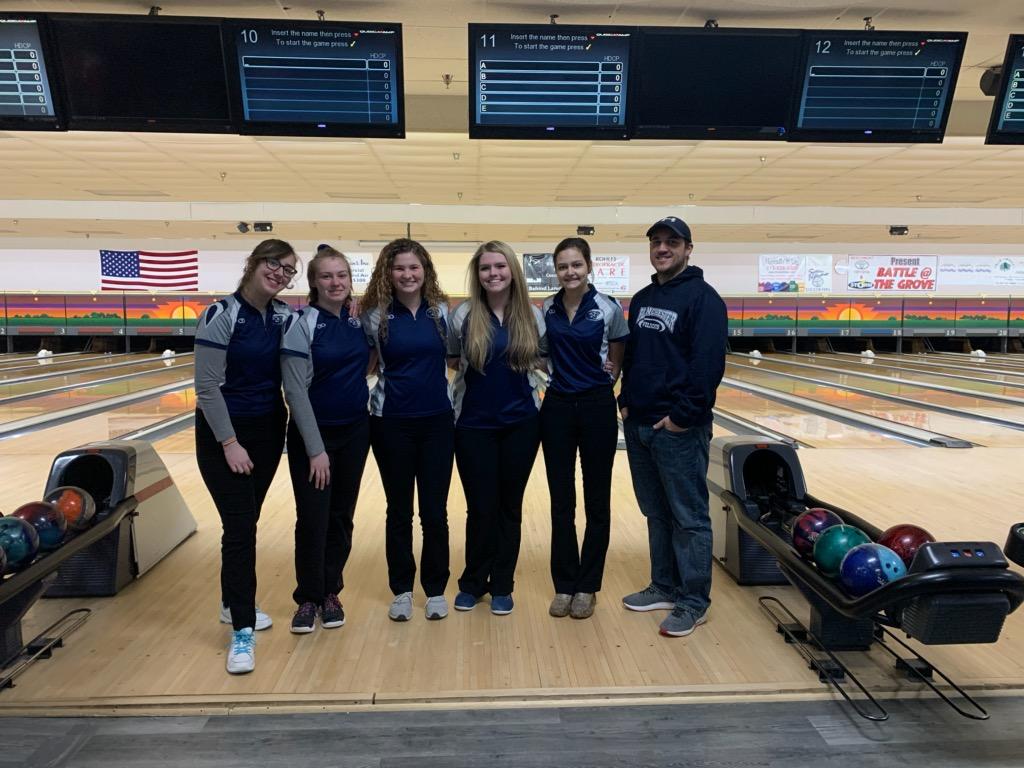 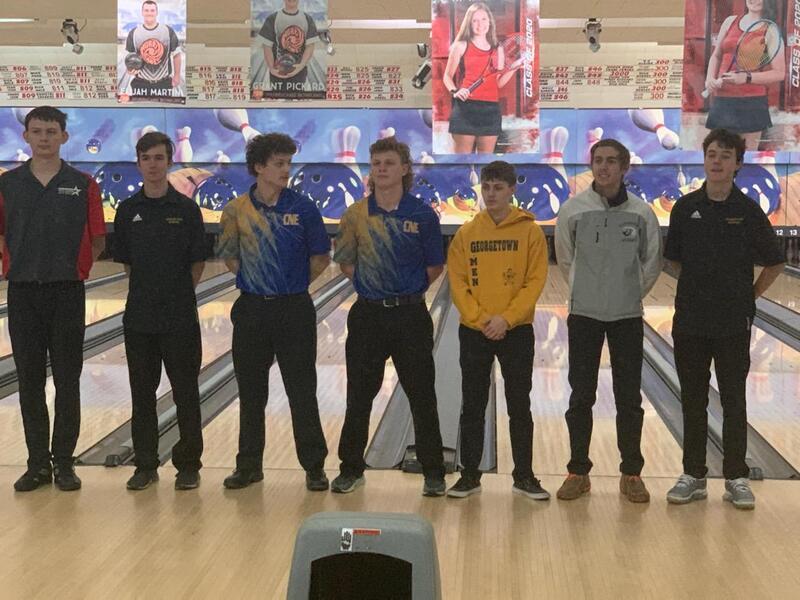 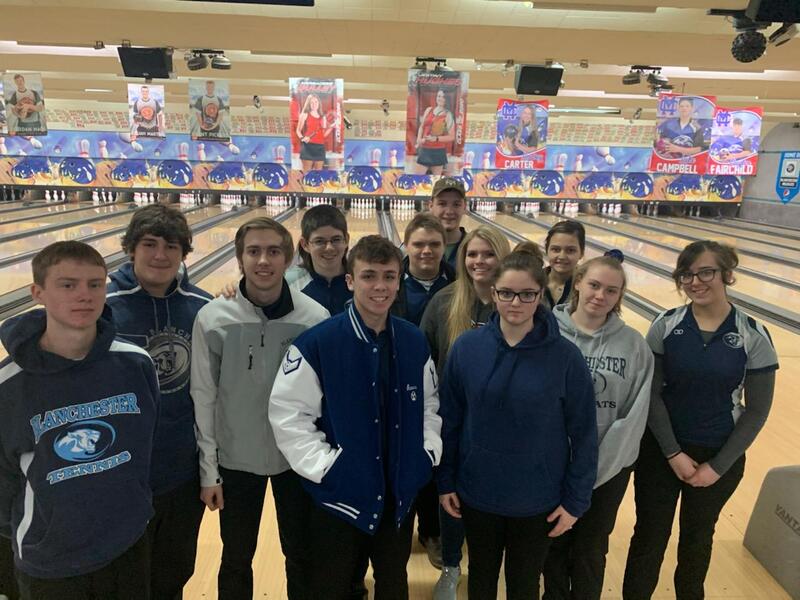 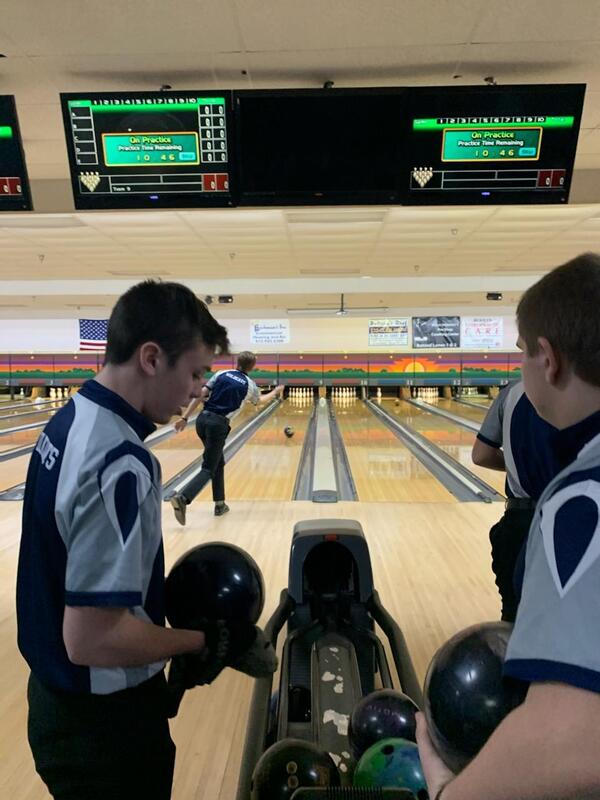 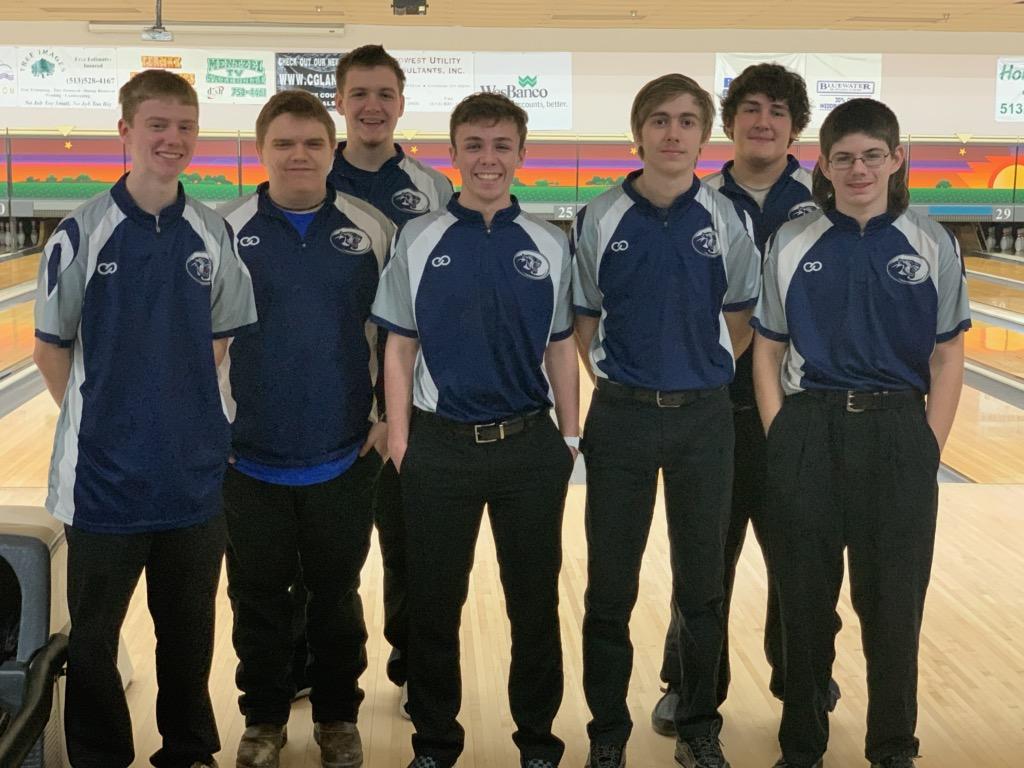 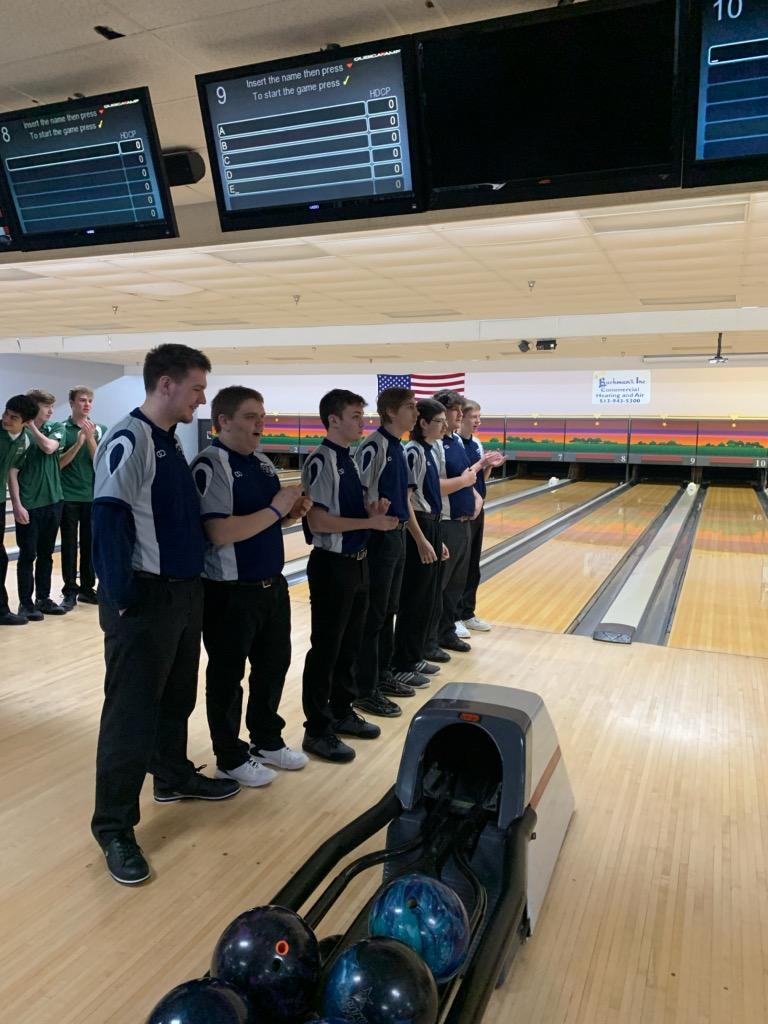