The girls played hard to get this far and gave everything they had. I’m proud to finish the season 7-8 and make it to the second round of tournaments. I can’t wait to watch these girls play on the High School level next year - Coach Stanforth

The 8th grade Ladycats started their tournament play Saturday 2/10 with a 30-22 win against Clinton Massie.

2/5/18 - BMS girls bkb @ East Clinton
The Blanchester Ladycats 7th grade basketball team end their regular season play with a lost to East Clinton 52-27. Olivia Potts led the team with 7 points. Ainsley Whitaker and Hailey Mulvihill each had 6, while Kaidyn Hamm and Madison Tipton each had four. The Ladycats travel to Goshen this weekend for the league tournaments. -Coach Mulvihill

The girls played a great game. They played hard and were smart on offense and defense. That  allowed them to keep the lead the entire game.
G. Irwin, T.Combs, L. Tedrick, and M. Creager all were 100% from the free throw line. Free throws are something we’ve worked hard on all season and it was nice to see the girls do what needed to be done when we needed it most.
We ended the regular season 7-8 record. I’m proud of the girls and all of their hard work they’ve put into this year. We now need to focus on the Tournaments that start Saturday- coach Stanforth -Coach Stanforth

The girls played a great game. They played as a team and it showed with good defense and a tireless offense for the entire game. We held our lead at half. The Ladycats came out the 2nd half taking good shots. We did a great job of shutting down the lane and the outside shots. - Coach Stanforth

Next game is Monday 1/29 @ home vs CNE 7th grade starts at 4:30 and 8th grade to follow - Coach Stanforth
​
1/18/18 - BMS girls bkb HOME vs Western Brown
The 7th grade Ladycats cats basketball team lost to Western Brown 11-30.
Hailey Mulvihill led the team with 4 points and 8 rebounds. Ainsley Whitaker had 3 points and 8 rebounds. Braylee Stanforth and Kaidyn Hamm each had 2 points a piece. Defense was led by Olivia Potts, Destiny Blankenbeckler and Madison Tipton who each had 4 steals.  -Coach Mulvihill

Next game is 1/24 at Wilmington - Coach Stanforth

The girls struggled to beat the press the first half. We couldn't catch the long passes or the fast breaks and those points added up quick. We came out and played better offense and defense the second half  but it wasn't enough to close the gap.

We struggled in the beginning to shut down Georgetown's point guard. Once we contained her it allowed us to start playing good defense and putting points on the board. The entire team played a great game. I hope their intensity, drive, and teamwork continues.

The Blanchester 7th grade Ladycats  basketball team came away with a big 41-15 victory Tuesday night against Georgetown.
The Ladycats dominated the first half on defense only allowing 3 points while scoring 26.
Kaidyn Hamm led the scoring effort with 13 points, 6 of which were 3 pointers.  Olivia Potts took charge of the new offense with 6 points, 2 rebounds, and 3 assists. Emily Koch also came up big with 6 points, 10 rebounds and 1 steal. Coach Mulvihill said it was a great team effort by all, with almost everyone scoring.
Ainsley Whitaker, Hailey Muvihill and Madison Tipton each had 4 points. Ainsley also had 7 rebounds and 3 steals. Hailey had 8 rebounds and Madison had 4. Bekah Davenport and Braylee Stanforth also chipped in two points each. Braylee also pulled down 6 rebounds. Josi Wilson, Destiny Blankenbeckler and Makayla Lanham also contributed to the win with their great defensive efforts causing turnovers on our press and combining for several steals. ​ -Coach Mulvihill

12/20/17 - BMS girls bkb HOME vs. East Clinton
The Blanchester Ladycats 7th grade basketball team lost to an undefeated East Clinton team 25-38.
We started off the game flat with an early deficit of 1-12. Olivia Potts sparked the teams 'offense with a quick 6 points, including a 3 pointer to bring it to 8-14 at the end of the 1st quarter. This would be the closest that we would bring the score. Potts led the scoring effort with 19 points, 6 of which were 3 pointers. She was 90% for field goal attempts, and 75 % from the free throw line. Potts also had 2 rebounds and several steals.
Hailey Mulvihill and Ainsley Whitaker dominated the boards with 10 rebounds a piece. Mulvihill also had 3 blocks and 2 points. Whitaker also had 3 steals and 2 points while Emily Koch also chipped in 2 points and 2 rebounds.
I was very proud of the teams overall defensive effort.  We set goals to play more aggressively and almost every player came out with atleast one or more steals or a defensive turnover.
We have a three week break in our schedule and next will take on Georgetown January 8th. -Coach Mulvihill

The Cats are going into break with 4 wins and 3 losses. We hope the short break will give enough time for a couple of injuries, bumps, and bruises to heal.  We're looking forward to carrying the momentum into the New Year. We play 1/8 @ Georgetown 7th grade at 4:30 8th grade 5:30. -Coach Stanforth
​
12/18/17 - BMS Ladycats bkb @ Clinton Massie
The Blanchester Ladycats basketball team lost to Clinton Massie Monday evening 40-17. Hailey Mulvihill was the lead scorer with 6 points, 9 rebounds and 2 blocks. Emily Koch had 4 points and 1 rebound. Olivia Potts had 3 points, 4 rebounds and 2 assists. Kaidyn Hamm and Destiny Blankenbeckler each had 2 points. Destiny also had 2 rebounds, 3 assists and 4 steals. The Ladycats host East Clinton Wednesday at 4:30. -Coach J Mulvihill

All the girls played great defense and worked hard on offense. Next game is Wednesday 12/20 @ home against East Clinton.  -Coach Stanforth
12/13/17 - BMS Ladycats bkb @ CNE
The Blanchester 7th grade basketball team lost a close game to CNE 20-17 Wednesday evening. Kaidyn Hamm led the team with 6 points and 3 steals. Olivia Potts had 5 points and 3 rebounds. Makayla Lanham had 4 points and 2 rebounds, and Ainsley Whitaker chipped in two points and 5 rebounds. Hailey Mulvihill, Madison Tipton and Braylee Stanforth also hit the boards with 5 rebounds a piece. It was a great team effort by all. The Ladycats travel to Clinton Massie Monday evening.  -Coach Mulvihill


​
12/11/17 - BMS Ladycats bkb HOME vs. Wilmington
Blanchester 8th grade Ladycats basketball had a 26-19 win over Wilmington on Monday.
Leading the Wildcats was Grace Irwin with 8 points and 4 of those from the free throw line. Madison Creager gave 6 points and 4 rebounds. Zoie Stanforth added 6 points and 6 rebounds. Daelyn Steahling chipped in 2 points, an impressive 9 blocks, and 8 rebounds. Lacie Tedrick added 2 points and 5 rebounds. Emmy Hodge gave 2 points and 5 rebounds.Taylor Combs helped with great defense and 5 rebounds.
This was a win the girls needed and had been working for coming off of two hard losses. The entire team worked hard on offense and defense and it paid off in the end. We stand at 2-2 for the season. Next game is Wednesday at CNE - Coach Stanforth

12/6/17 - BMS girls bkb @ Batavia
Blanchester 8th grade Ladycats had a 49-12 loss against Batavia on Wednesday 12/6.
Emmy Hodge lead the team with 4 points  Grace Irwin and Zoie Stanforth each chipped in a 3 point shot and Madison Creager added 2. Next game is at home on 12/11 and hosting Wilmington.  -Coach Stanforth

The Blanchester 7th grade Ladycats basketball team lost to Batavia 27-16. The Ladycats struggled offensively to make shots shooting less than 20% from the paint. Kaidyn Hamm and Olivia Potts led the scoring effort with 5 points each. Bekah Davenport, Ainsley Whitaker and Braylee Stanforth each had 2 points. Ainsley, Braylee, and Hailey Mulvihill also hit the boards and pulled down several rebounds. Coach Mulvihill and Whitaker were very pleased with the overall defensive effort of the team. They will host Wilmington Monday the 11th at 4:30. -Coach Mulvihill
​ 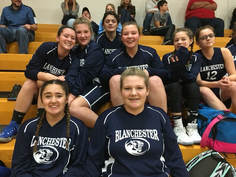 We struggled in the beginning to find our groove but came back the second half refreshed and putting the work in to make the win happen. I can't wait to see what the rest of the season brings. -Coach Stanforth
​
The Blanchester 7th grade Ladycats  basketball team lost their season opener to Western Brown 33-18.  Olivia Potts and Emily Koch led the team with 6 points each. Braylee Stanforth and Madison Tipton each had 2 while Hailey Mulvihill and Destiny Blankenbeckler each chipped in 1. The Ladycats host Goshen Monday at 4:30.  -Coach Mulvihill 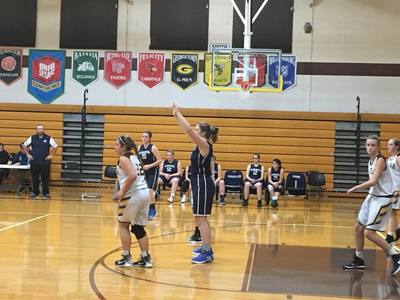 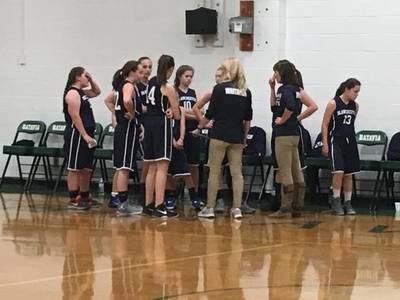 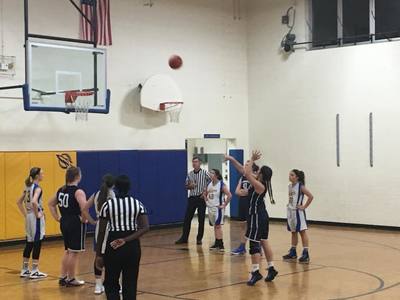 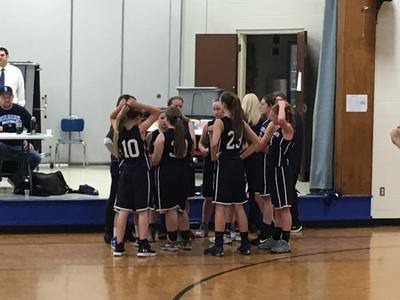 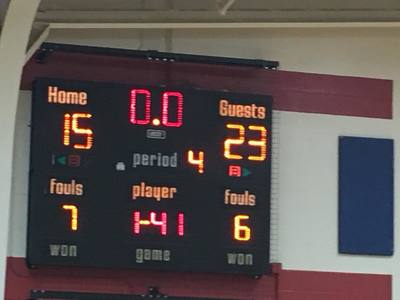 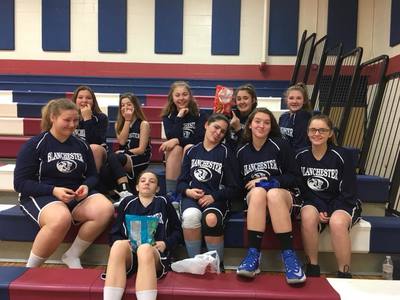 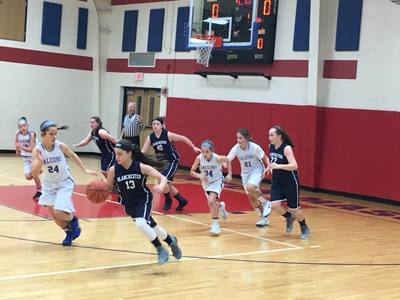 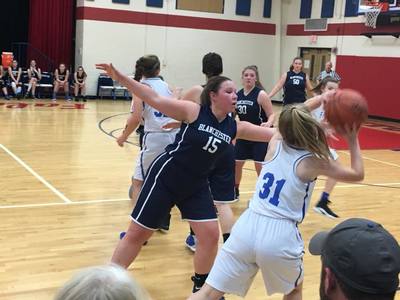 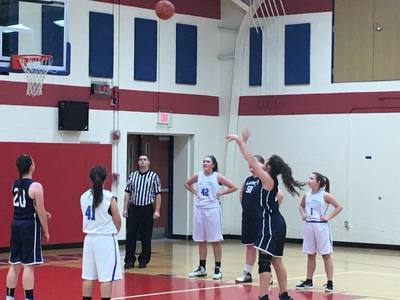 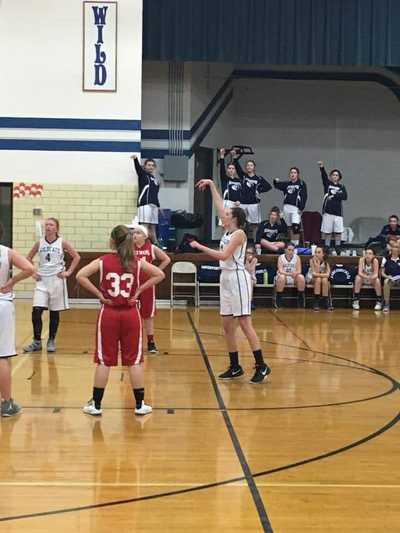 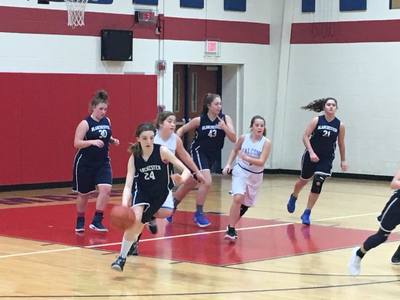 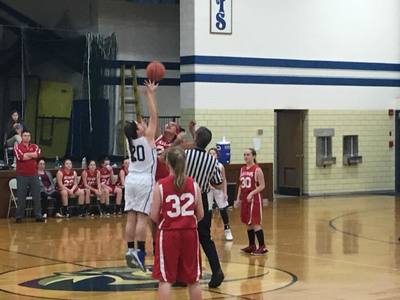 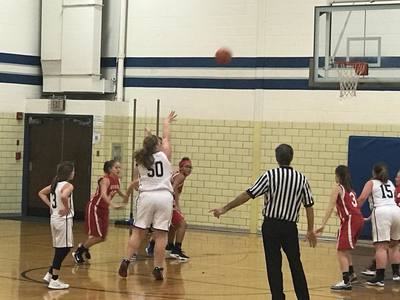 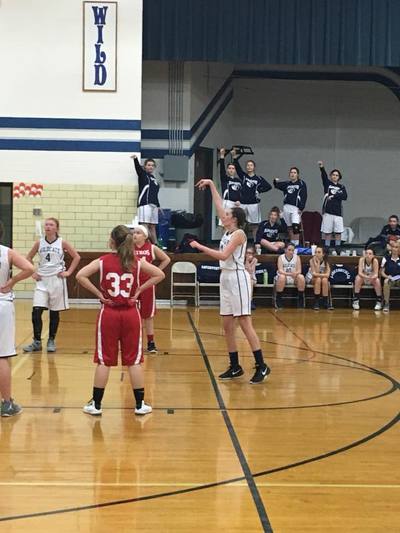 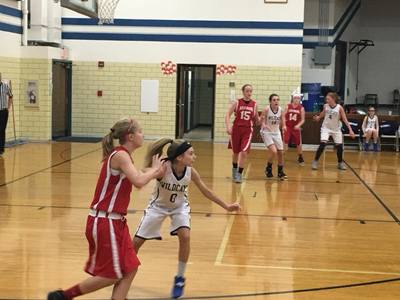